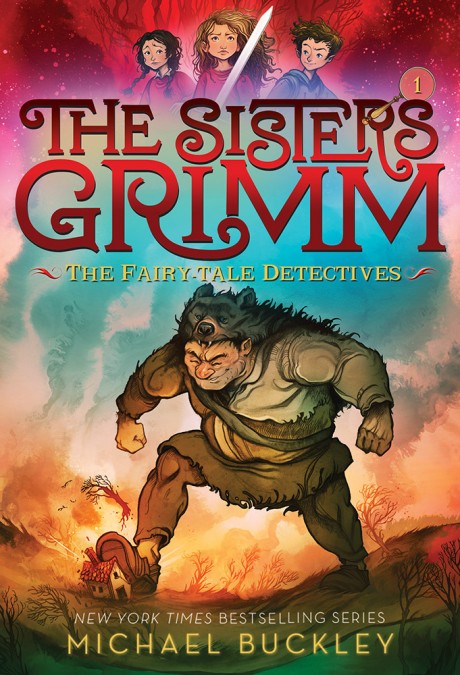 The Fairy-Tale Detectives (The Sisters Grimm #1)

Orphaned sisters Sabrina and Daphne are sent to live with their newly discovered grandmother, Relda Grimm, in the strange town of Ferryport Landing. The girls soon learn a family secret: that they are descendants of the famous Brothers Grimm, whose book of fairy tales is actually a history book and whose characters are still alive in Ferryport, New York.

When a terrorizing giant goes on a rampage through the town, it’s up to the Sisters Grimm to stop him and to solve the mystery of who set the giant loose in the first place. Was it corrupt Mayor Charming, formerly Prince Charming, who desperately wants his kingdom back? The Three Not-So-Little Pigs, the shifty town cops? Or Snow White or Jack the Giant Killer or one of the many other fairy-tale characters who seem to have it out for the young sisters Grimms?

Fast paced, with familiar characters in new surroundings and adventure, and cleverly inserted vocabulary lessons, this book, and this series, are special for young readers.

Repackaged in paperback with new cover art, this anniversary edition of the beloved Sisters Grimm series are the perfect opportunity for existing fans to revisit the adventures of the Grimm family and for new readers to discover the magic of the series for the first time.