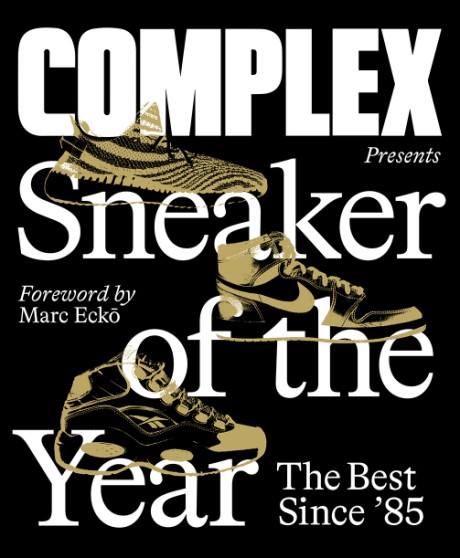 Complex Presents: Sneaker of the Year

In 1985, Nike released Michael Jordan’s first sneaker, the Air Jordan 1, and sneaker culture was born. With vibrant photographs and illustrations throughout, as well as input from some of the sneaker world’s most important voices, this compilation is a must-have for hypebeasts and sneakerheads everywhere.

Now, thousands of people wait in line at Supreme, and companies throw millions of dollars at LeBron James to keep him in their marketing plans. The trend that saw steady growth for decades with the emergence of sports, hip-hop, and sportswear advertising has exploded into a phenomenon. And no one has watched that phenomenon more closely than Complex. Highlights include:

Sneaker of the Year explores the past 35 years of sneaker culture with the expertise, authority, and passion that only Complex can offer.

Fashion designer Marc Ecko says in his foreword, “The players who attached their names to iconic sneakers became icons themselves, figures whose personalities could shape multinational companies from the boardroom down. Jordan—and Charles Barkley, and Allen Iverson, and dozens more—rose to the level that had once been off limits to athletes. . . . What began with Jordan wearing a pair of sneakers culminated in a moment of economic and social justice. It’s a power shift we have never seen again in any industry—and something we may not witness again”

Whether you owned them back in the day or collect them now, this is a full-color trip down memory lane for sneakerheads.

Complex is a New York–based media platform that reports on trends in style, pop culture, music, and sports, with a focus on streetwear, sneaker culture, hip-hop, and graphic art. It was founded by Marc Ecko in 2002.