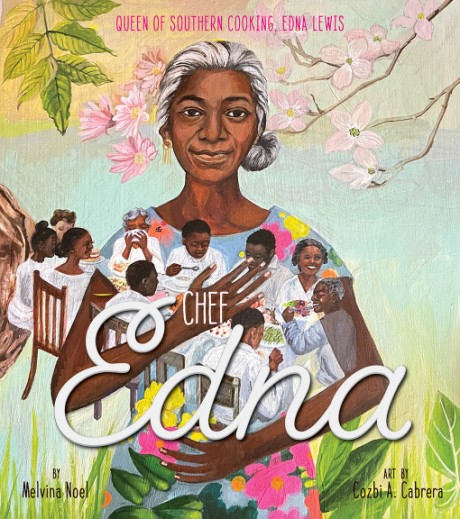 A warm and inviting picture-book portrait of African American culinary legend Edna Lewis, who brought Southern cooking to the masses

Edna loved to cook. Growing up on a farm in Freetown, Virginia, she learned the value of fresh, local, seasonal food from her Mama Daisy, how to measure ingredients for biscuits using coins, and to listen closely to her cakes to know when they were done. Edna carried these traditions with her all the way to New York, where she became a celebrated chef, who could even turn traditional French food into her signature Southern style. The author of several cookbooks and the recipient of numerous awards, Chef Edna introduced the world to the flavors of her home.

Melvina Noel loves to write and to bake cakes. Thanks to Edna, she listens to her cakes to tell her when they are done. Noel lives in Virginia. This is her debut picture book. Cozbi A. Cabrera is an award-winning illustrator whose gorgeous books—including Exquisite: The Poetry and Life of Gwendolyn Brooks, published by Abrams—have garnered a Coretta Scott King Honor as well as a Caldecott Honor for illustration. She lives in Illinois.