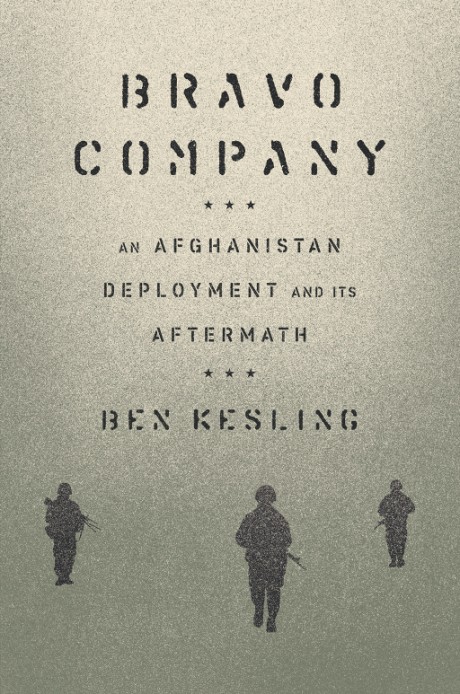 An Afghanistan Deployment and Its Aftermath

A timely and searing account of the American war in Afghanistan

In Bravo Company, journalist and combat veteran Ben Kesling tells the story of the war in Afghanistan through the eyes of the men of one unit, part of a combat-hardened parachute infantry regiment in the 82nd Airborne Division. A decade ago, the soldiers of Bravo Company deployed to Afghanistan for a tour in Kandahar’s notorious Arghandab Valley. By the time they made it home, three soldiers had been killed in action, a dozen more had lost limbs, and an astonishing half of the company had Purple Hearts.

In the decade since, two of the soldiers have died by suicide, more than a dozen have tried, and others admit they’ve considered it. Declared at “extraordinary risk” by the Department of Veterans Affairs, Bravo Company was chosen as test subjects for a new approach to the veteran crisis, focusing less on isolated individuals and more on the group.

Written with an insider’s eye and ear, and drawing on extensive interviews and original reporting, Bravo Company follows the men from their initial enlistment and training, through their deployment and a major shift in their mission, and then on to what has happened in the decade since; as they returned to combat in other units or moved on with their lives as civilians, or struggled to. This is a powerful, insightful, and memorable account of a war that didn’t end for these soldiers just because Bravo Company came home.

"Bravo Company is an honest account of bravery, sacrifice, and what it means to seek redemption. As a veteran of combat himself, Ben Kesling is able to intimately and honestly document war and its aftermath in ways others haven't. If you want to understand what war in Afghanistan meant to those who fought—or if you were in combat and want to understand more about yourself—read this remarkable book."
Jake Tapper, CNN anchor and author of The Outpost —

“Journalist and Marine Corps veteran Kesling’s gut-wrenching debut documents the physical and psychological tolls of the war in Afghanistan through the story of one U.S. Army unit’s deployment . . . Devastating yet cautiously hopeful, this is an essential study of combat trauma.”

“An urgent account of a parachute infantry regiment in Afghanistan . . . An outstanding narrative about a single unit’s harrowing experiences in the ‘forever war.’”
Kirkus, *starred* review —

“Gut-wrenching, emotionally charged...excruciatingly detailed...Bravo Company is that rare deep dive into the meaning of war and soldiering, the inevitable tragedies and trauma that accompany them, and what happens after you hang up the uniform.”
Booklist —

“Bravo Company goes places other books don’t. Ben Kesling captures not only war, but the way war puts the complexities and paradoxes of life itself in sharp relief, revealing to us the strangeness of memory and love and loss and honor and pain. Bravo Company is beautiful and profound.”
Phil Klay, National Book Award-winning author of Redeployment and Uncertain Ground —

“Why can't some veterans and survivors leave their wars in the past? How does the same experience become one person's bar tale and another's formative bane? With great skill and masterful reporting, Ben Kesling examines these questions and more in Bravo Company. War's long, dark tail emerges in all its terror and thrill here, summoning the old wisdom of the past not even being past. What a great book.”
Matt Gallagher, author of Youngblood and Empire City —

“From the Iliad to the Odyssey, stories of war are typically about going to it or returning from it. In Bravo Company, Ben Kesling has done a masterful job braiding together these twin strands. For those who came home, Kesling’s book is a road map of their journey. For those who were lost, this book stands as a memorial.”
Elliot Ackerman, author of The Fifth Act: America’s End in Afghanistan —

“The men of Bravo Company are captivating, raw, salty—and above all real. Ben Kesling knows of what he writes and does us a service to bring home their stories of war and the battles afterward.”
Quil Lawrence, NPR correspondent and former bureau chief in Baghdad and Kabul —

“Bravo Company is not your average book about the military or men at war. The book, brilliantly told through the lens of one company, perfectly captures the true cost of the decades-long war in Afghanistan. We meet young men who dreamed of life and adventure in the U.S. Army, only to be broken physically and mentally by the toll of combat. For anyone who ever wanted to know about the cost of war, this is the book.”
Ron Nixon, global investigations editor, Associated Press —

“If you want to understand the fingerprints of American military culture and the terrible human consequences of bad policy decisions, this excellent book by Ben Kesling is the way.”
Kori Schake, director of foreign and defense policy at the American Enterprise Institute —

“In Bravo Company, Ben Kesling searingly transports readers first into the lush valley at the heart of President Barack Obama’s surge, where paratroopers saddled with an unsustainable mission rolled the dice with every step they took, and then into their lives back home as they wrestle with grievous injuries and the loss of friends in a war America ultimately lost.”
Wesley Morgan, author of The Hardest Place: The American Military Adrift in Afghanistan's Pech Valle —

“Ben Kesling . . . has written what may be the defining book about a very different version of the war in southern Afghanistan . . . The author masterfully captures the dark humor that troops used to cope with their real anxieties through writing that simultaneously captures the infantryman’s spirit (and profanity) in a way any reader can understand.”
Military Times —

Ben Kesling is a Midwest correspondent for the Wall Street Journal, where he focuses on domestic security and veterans issues. Kesling has a Master of Divinity degree from Harvard Divinity School, attended the Medill School of Journalism at Northwestern University, and previously served as a Marine Corps infantry officer in Iraq and Afghanistan. He is also a two-day Jeopardy! champion. He lives in Chicago with his wife and kids.