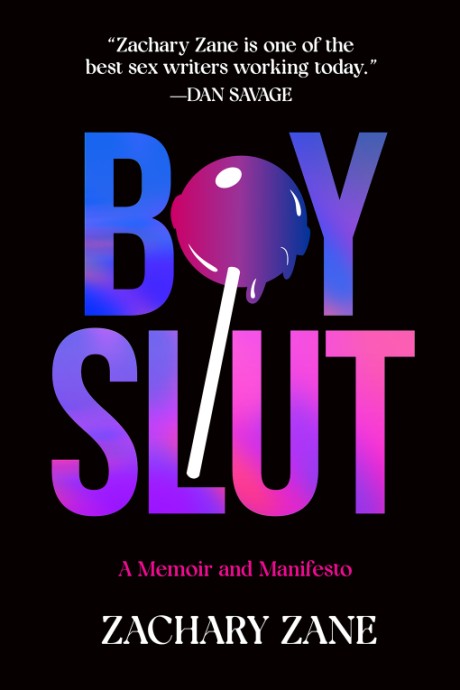 A Memoir and Manifesto

"Zachary Zane is one of the best sex writers working today."—DAN SAVAGE

A sex and relationship columnist bares it all in a series of essays—part memoir, part manifesto—that explore the author’s coming-of-age and coming out as a bisexual man and move toward embracing and celebrating sex unencumbered by shame

As a boy, Zachary Zane sensed that all was not right when images of his therapist naked popped into his head. Without an explanation as to why, a deep sense of shame pervaded these thoughts. Though his therapist assured him a little imagination was nothing to be ashamed of, over the years, society told him otherwise.

Boyslut is a series of personal and tantalizing essays that articulate how our society still shames people for the sex that they have and the sexualities that they inhabit. Through the lens of his bisexuality and much self-described sluttiness, Zane breaks down exactly how this sexual shame negatively impacts the sex and relationships in our lives, and through personal experience, shares how we can unlearn the harmful, entrenched messages that society imparts to us.

From stories of drug-fueled threesomes and risqué Grindr hookups to insights on dealing with rejection and living with his boyfriend and his wife, Boyslut is reassuring and often painfully funny—but is most potently a testimony that we can all learn to live healthier lives unburdened by stigma.

“Zachary Zane is one of the best sex writers working today. He has a unique ability to balance humor with a deep appreciation for the vulnerability and humanity of his subjects. And reading about Zane’s own sexual adventures is like getting invited to Sunday brunch by your wittiest, sluttiest, funniest friend and getting to listen to him recount his crazy weekend.”

“Zachary Zane is a FABULOUS queer writer and thinker who’s doing the Lord’s work by promoting bi-visibility, teaching the children about polyamory, and helping the LGBTQ+ community—and really, all people—learn how to become their best authentic selves.”
BILLY PORTER, actor, singer, and author —

“In a world where sexuality and masculinity are often misunderstood and conflated, Zachary Zane manages to use his own unique experiences to knock down stigmas and expand what it means to have a healthy relationship with sex. His honest approach is a welcome reprieve from the messages of our youth and his self-exploration not only encourages but enables us to do our own.”
ALLISON RASKIN, podcaster and New York Times bestselling author —

“Zachary is so adept at creating and maintaining exuberant and generative community in spaces that typically feel isolating or forbidding. In the same way, his writing is an invitation that bridges divides. I live for his verve, his no-holds-barred revelations, and his wisdom.”
R. ERIC THOMAS, national bestselling author —