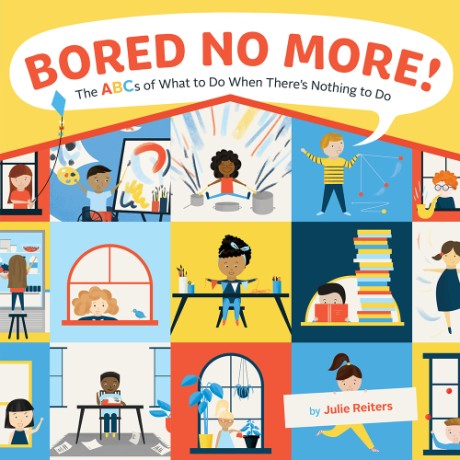 The ABCs of What to Do When There's Nothing to Do

The ultimate book of boredom busters from A to Z—perfect for any time you're stuck at home or in need of a little inspiration!

Whether you’re home with the flu or stuck inside on a snowy day, this lively picture book offers fun suggestions for families looking to step away from their screens. Julie Reiters’s bold and graphic art style is sure to appeal to readers of all ages, and the poetic text makes for a smooth read-aloud. With options from A to Z, Bored No More! is sure to provide inspiration for what to do when there’s nothing to do!

"Uncluttered illustrations with bold, contrasting colors make this a good group read-aloud, but the illustrations are so self-explanatory that young nonreaders will be able to understand the book without help. . .An excellent resource for those days when there’s 'nothing to do.'"
Kirkus Reviews —

Julie Reiters is an animator, illustrator, and designer who’s been passionate about visual storytelling since an early age. She co-owns and operates an animation and motion design studio, which has created content for documentary films, television, live events, and multinational companies such as Visa and the Westminster Kennel Club Dog Show. Reiters's animated short film that inspired Bored No More! was an official selection in 2020 at the Chicago International Children’s Film Festival, the Denver Film Festival, and the Boston International Kids Film Festival, among others. She lives in Denver, Colorado, with her fiancé, Dillon, and their dog, Harper. Learn more at juliereiters.com.