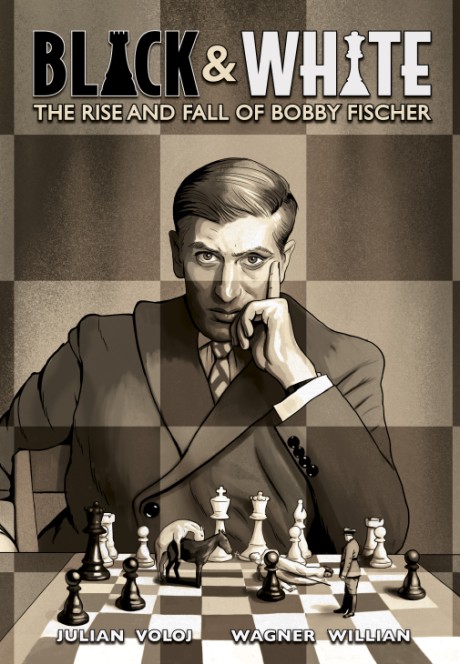 The Rise and Fall of Bobby Fischer

A graphic novel biography following the life of Bobby Fischer, from chess wunderkind and national hero to his eventual spiral into madness and infamy

The life of Bobby Fischer (1943–2008) had many unexpected moves—from his solitary childhood to his stratospheric accomplishments in the world of competitive chess, and eventually, his decent into mental illness and disgrace. Black & White begins in Brooklyn, where Fischer was born and raised by a single mother. By the time he was a teen, he had established himself as a loner and dropped out of school. But none of that mattered; he had found his true calling—chess.

In 1972, Fischer played what many consider “the game of the century” against the Soviet Union’s chess champion Boris Spassky at the height of the Cold War. Later, Fischer became the youngest-ever US Chess Champion and the game’s youngest grandmaster. Never before had chess received such international attention. Fischer, whose sole focus in life up until then was chess, reached the Olympus of chess at 29, and then . . . he disappeared.

Suffering from mental illness, the chess genius became increasingly paranoid, lost in anti-Semitic conspiracy theories—despite the fact that he himself was Jewish—and died as a fugitive in Iceland. With Black & White, author Julian Voloj and illustrator Wagner Willian have crafted a beautiful and fascinating work that reveals Fischer’s history while also contextualizing his lasting impact on pop culture. Black & White is the first-ever graphic novel to tell Fischer’s story and examine the legacy he left behind.

Julian Voloj is a New York–based writer whose work has been published in the New York Times, Rolling Stone, the Washington Post, and many other national and international publications. Born to Colombian parents in Germany, where he studied literature and linguistics, Voloj moved to New York in 2004. His fascination for forgotten heroes and hidden figures stems from his own family history and has been a leitmotif in his nonfiction graphic novels.

Wagner Willian is a comics artist, visual artist, writer, and editor. He has won the main awards in the Brazilian market, such as Prêmio Jabuti, HQMIX, and Troféu Grampo de Ouro, and has been published in France, Portugal, Germany, Spain, the Czech Republic, and Poland. He lives in São Paulo.