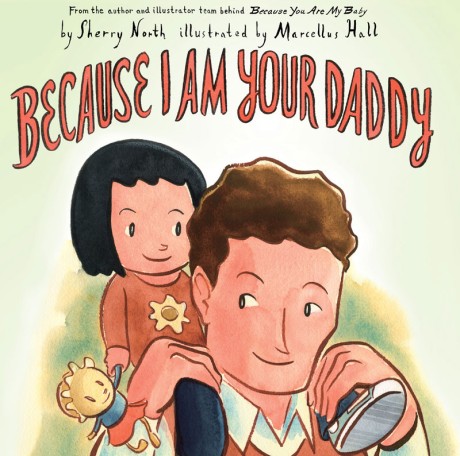 Because I Am Your Daddy

How much do fathers love their children? Enough to fly them to school in a plane? Enough to dig for the biggest dinosaur the world has ever known? From exploring dark caves to leading a marching band to even being a space alien, a father’s love is unconditional, and he will do anything to make sure all of his child’s dreams come true.

The dynamic duo of Sherry North and Marcellus Hall team up once again to treat parents and children to a story that celebrates affection with imagination. Because I Am Your Daddy is a great read-aloud book at storytime or a soothing book at bedtime, and an ideal gift for new fathers on Father’s Day.

Praise for Because I Am Your Daddy
"Daddy/daughter bedtime reading doesn't get any cozier. The text is accompanied by Hall's fun and stylishly retro watercolors." -BookPage

"The loving bond between parent and child is at the core of the story, and the joy is as much in the hugs as in the imaginative play." -Booklist

"Hall's simply gorgeous retro-styled watercolors depicting a dad with his dark-haired daughter and her dolly go to town with each premise--the image of the three of them surfing is nothing short of breathtaking in its jewel-toned splashy motion." -Kirkus reviews

Also available by Sherry North and Marcellus Hall
Praise for Because You Are My Baby
“Rhythms reminiscent of those in Margaret Wise Brown’s Runaway Bunny . . . The sentimental text is balanced by simple geometric shapes that evoke rockets, sea life, and airplanes adventuring happily together in uncluttered spreads.” —Booklist

Praise for City I Love

[STAR] “Many added layers of narrative delight as well as beautiful colors and an eye-catching sense of design . . . This book is really special, a global tour de force.” —School Library Journal, starred review