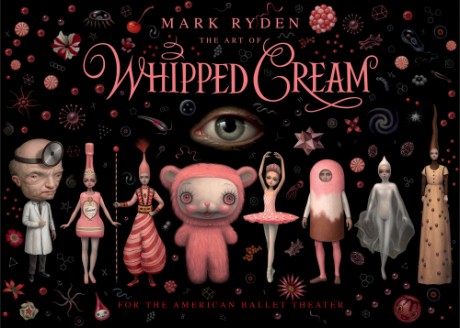 For the American Ballet Theatre

In 2017, Mark Ryden, the “Godfather of Pop Surrealism,” tackled a new medium: ballet.In partnership with American Ballet Theatre (ABT), he created “Whipped Cream,” a new masterpiece that has since become a part of the theatre’s classic repertoire.

Featuring interviews with and commentaries from principal dancers—including Misty Copleland, David Hallberg, Stella Abrera, Gillian Murphy, and Daniil Simkin—and members of the creative team, The Art of Whipped Cream showcases Ryden’s amazing concept art as well as paintings made specifically for this publication. Follow Mark Ryden’s process from initial drawings to set design and be a part of this groundbreaking new ballet. From costumes to backdrops and accessories, you’ll be able to observe and experience the show through exclusive images as if you were sitting in the first row!

Blending pop culture themes with techniques reminiscent of the old masters, Mark Ryden has created a singular style that blurs the traditional boundaries between high and low art. His work first garnered attention in the 1990s when he ushered in a new genre of painting, "Pop Surrealism,” dragging a host of followers in his wake. Ryden has trumped the initial surrealist strategies by choosing topics loaded with cultural connotation.

Mark Ryden received a BFA in 1987 from Art Center College of Design in Pasadena. His paintings have been exhibited in museums and galleries worldwide, including a career-spanning retrospective “Cámara de las maravillas” at The Centro de Arte Contemporáneo of Málaga, as well as an earlier retrospective “Wondertoonel” at the Frye Museum of Art in Seattle and Pasadena Museum of California Art. He lives in Portland, Oregon, with his wife, the artist Marion Peck.