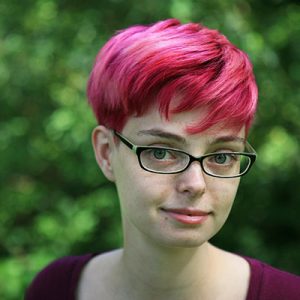 Corinne Duyvis is the critically acclaimed author of the YA sci-fi/fantasy novels Otherbound, which Kirkus called “a stunning debut;” On the Edge of Gone, which Publishers Weekly called “a riveting apocalyptic thriller with substantial depth;” and The Art of Saving the World, which Kirkus called “impossible to put down.” She is also the author of the original Marvel prose novel Guardians of the Galaxy: Collect Them All. Corinne hails from the Netherlands. She’s a co-founder and editor of Disability in Kidlit as well as the originator of the #ownvoices hashtag.