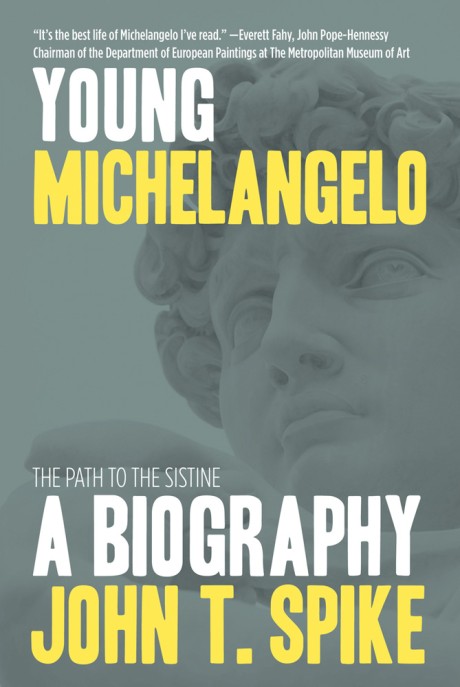 The Path to the Sistine: A Biography

In the most important biography of Michelangelo to appear in modern times, John T. Spike illuminates heretofore unrevealed aspects of Michelangelo’s complex personality through examinations of the Pietà, the David, the artist’s struggle with Leonardo da Vinci for artistic mastery, and an uneasy relationship with Pope Julius II. Over the long arc of his artistic development, Michelangelo was involved in the most troubling controversies of his age, an eyewitness to the bonfires of the vanities, the Rome of the Borgias, the siege of Florence, and the Inquisition’s burning of heretics at the stake. In this long-awaited reinterpretation of the artist’s early life and career, Spike re-creates Michelangelo’s cities, Florence and Rome, animating their daily life with sketches of Lorenzo the Magnificent, Leonardo, Savonarola, Raphael, and Machiavelli.
Praise for Young Michelangelo:
"Spike captures his magnetism, his drive and the sheer scale of his ambition.... A veteran biographer of Caravaggio, Masaccio and Fra Angelico, Spike relates Michelangelo’s wanderings to his restlessness and the troubles of his era, from the rise of the fundamentalist preacher Savonarola in Florence to the many skirmishes provoked by Rome’s bellicose Julius."—The Sunday Times
"No art historian has got closer to Michelangelo than John T. Spike. The Florence-based American, whose coup here is his access to the artist’s recently published financial accounts and consequently enhanced understanding of his dealings with patrons, is an immensely flexible writer who has produced a book of alternating pans and zooms. . . . At the same time, however, the worldly dealings that Spike recounts, and his textured reconstruction of the times that his subject moved moodily through, make the artist seem more human than ever before. We’re left with a Michelangelo who lived on earth as a man, but also had an element of the unearthly about him. . . . Though it probably only portends a trilogy, it’s perhaps no accident that Spike’s narrative ends in the artist’s 33rd year."—The Telegraph
"As John T. Spike argues in this crisply thorough biography, Michelangelo Buonarroti, like so many men of talent, seems to have known his own worth almost from the moment he came into the world. . . . Certainly the man Spike gives us is an altogether more worldly figure than the agonised ecstatic served up by Irving Stone and Charlton Heston on the silver screen."—Daily Express
"John T. Spike, an art historian, curator and critic, has done some impressive research to flesh out the early years of the artist's life, right up until his return to Rome in 1508 to focus on a commission in the Sistine Chapel. The young sculptor's daunting talent and quest to earn as much money as possible are woven into the story of the Italian Renaissance and the outsized figures of the age."—The Washington Post
"Spike, a renowned art critic, curator, and author, is the first modern writer to create such a comprehensive account of the master’s early life and rise to fame amid the political upheaval in the Papal States and Florentine Republic."—Art + Auction
"He was possibly the world's greatest artist, certainly its greatest sculptor, but John Spike gives us a nuanced human view of Michelangelo on his path to the ceiling of the Sistine Chapel. The reader meets a man dealing with financial problems, family pressures, artistic feuds, all set within the turbulent world of the Medici, the Borgias, and Savonarola. This is Michelangelo of reality, not myth."—Bill Cusumano, Nicola's Books, Ann Arbor, MI from September 2010 Indie Notables List
"Spike crystallizes historical detail into vivid, memorable imagery. . . . Alternating between accounts of the turbulent political atmosphere and details of Michelangelo’s most private moments in the sculpture studio, Spike creates a rich narrative that promises more intrigue than the best adventure novel."—Publishers Weekly
"Making the most of Michelangelo's ample correspondence and the recently published records of his extensive banking transactions, Spike has drawn an astonishingly vivid portrait of the artist's first 33 years. It's the best life of Michelangelo I've read, and it leaves one wishing the author would complete Michelangelo's life with his wonderful grasp of the artist's tenacious personality and Herculean achievement."—Everett Fahy, John Pope-Hennessy Chairman of the Department of European Paintings at The Metropolitan Museum of Art
"Tense and agile as an early sculpture, Young Michelangelo is a compelling portrait of the artist as a young man in a dangerous time."—Peter Robb, Author of M: The Man Who Became Caravaggio
"This erudite but immensely readable account is essential for anyone who desires to know more about Michelangelo's formation."—David Alan Brown, National Gallery of Art
"Spike is a masterful weaver of disparate information into a synthetic narrative. He provides a rich web of the political, social, and personal contexts against which Michelangelo's early career unfolded."—John Hunisak, Co-Author of The Art of Florence
"John T. Spike proves himself, yet again, as one of our most astute and readable authorities on the Italian Renaissance. In Young Michelangelo he approaches the artist through a compelling blend of solid scholarship, animated storytelling, and shrewd insight—and in the process he makes Michelangelo more fascinating than ever."—Ross King, Author of Brunelleschi's Dome and Michelangelo and the Pope's Ceiling

John T. Spike, critic, curator, and art historian, is the author of more than 20 culturally significant books on Renaissance, Baroque, and contemporary art. He lives in Florence, Italy, and is currently Distinguished Scholar in Residence at the College of William & Mary in Williamsburg, Virginia.