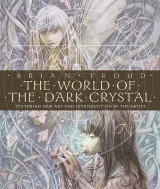 Buy
The World of the Dark Crystal
By Brian Froud

Now 20 years old, Jim Henson's classic fantasy film, The Dark Crystal, featuring the breathtaking concept design of renowned fantasy artist Brian Froud, is a soaring work of the imagination. This mystical adventure has such a huge cult following that when the film was recently re-released on video and DVD, it quickly sold a million copies. Just as remarkable is the cult status of The World of The Dark Crystal, Froud's book on the film. Originally published in 1982 and long out of print, this definitive volume, packed with brilliant artwork, has been in such demand that used copies can sell for well over $400. Abrams is now proudly reissuing this sought-after book in a brand new collector's edition. This beautifully printed reproduction of the original volume contains all of its stunning art and text, plus a new essay by Froud, illustrated with never-before-published paintings, drawings, and sculptures from the film's archives. And this new edition features a facsimile of a 20-page booklet Froud and Henson created to present the film to backers, a gorgeous overview of the story so rare only a few copies are known to exist. This collector's edition of The World of The Dark Crystal, like the re-released film, will truly be a must-have for Henson and Froud fans.

Brian Froud has created some of the most respected and highly acknowledged mythic artwork of our time. He has won numerous awards, including the Hugo Award for Best Original Artwork. Wendy Froud is an American (born in Detroit) who is a doll artist, sculptor, and puppetmaker, best known for her work creating creatures for the Jim Henson films The Dark Crystal and Labyrinth, as well as her work on the Star Wars series, for which she was the fabricator of Yoda. The Frouds live in Devon, England.