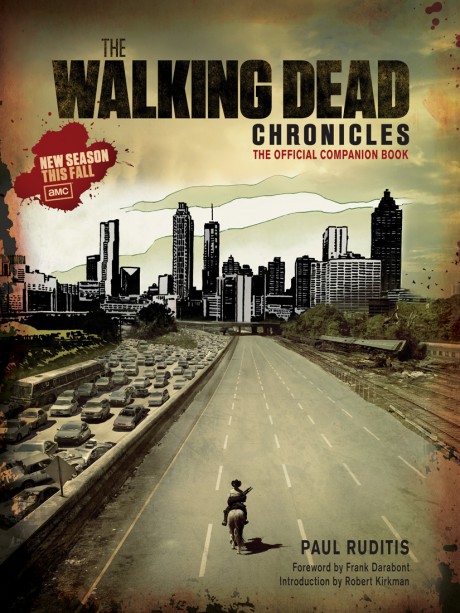 The Walking Dead Chronicles: The Official Companion Book is the only authorized, behind-the-scenes guide to Season One of the white-hot new AMC television series, The Walking Dead, which tells the story of a sheriff’s deputy leading a band of survivors in a post-apocalyptic world overrun by the undead.
Focusing on the making of the first season of the Golden Globe–nominated TV show, as well as the creation of the New York Times bestselling comic book on which the series is based, The Walking Dead Chronicles is lav­ishly illustrated with never-before-seen unit photography, storyboards, set designs, makeup and visual effects shots, and page-to-screen comparisons of the comic and TV show. Featuring new interviews with series creator Robert Kirkman and executive producer Frank Darabont, as well as the cast and crew, the book also includes sidebars that serve as a detailed episode guide, reproducing excerpts from early drafts and final scripts, and revealing new direc­tions for the second season and beyond.

Praise for the Walking Dead Chronicles:
“Paul Ruditis provides an interesting and insightful look at both the comic book and TV series. . . . The text is filled with thoughtful commentary from the cast and crew, as well as an eye-catching assortment of production photos, set designs, storyboards, special-effects images, and reproductions of comic book artwork.” —School Library Journal

Paul Ruditis has written or contributed to over a dozen official companion books to TV shows, including Bones, Prison Break, Buffy the Vampire Slayer, and The West Wing. He also writes novels for teens and adults and is currently writer and coeditor of a comic book series based on the TV show Charmed. He lives in Burbank, California.
Frank Darabont is the Academy Award– and Golden Globe–nominated writer, director, and producer of The Shawshank Redemption and The Green Mile. He developed The Walking Dead series for AMC and serves as executive producer, writer, director, and showrunner. He lives in Los Angeles, California.

Robert Kirkman is the New York Times bestselling author and creator of The Walking Dead and Invincible. Kirkman is a partner at Image Comics, where he founded the Skybound imprint, and is also a writer for and executive producer of AMC’s The Walking Dead. He lives in Backwoods, California.