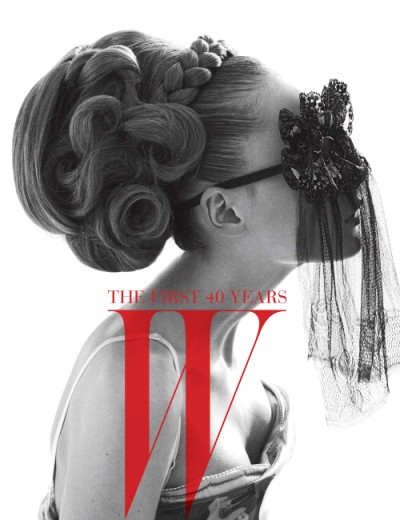 One of the world’s leading fashion magazines, W will celebrate its 40th anniversary with this volume—a collection of the most influential and iconic features and photos culled from its first four decades. W is renowned for its groundbreaking, provocative, often controversial fashion stories by such photographers as Steven Klein, Mert Alas and Marcus Piggott, Bruce Weber, Mario Sorrenti, Tim Walker, Juergen Teller, and Paolo Roversi, among many others, the best of which fill these pages. Divided into three sections—Who, Where, and Wow—this volume shows why W’s unique blend of unparalleled access, cultural smarts, and visual panache has always kept it at the forefront of not only the world of fashion, but also in art, design, style, beauty, celebrity, and society. Appearing in these pages are many of the world’s most talented, beautiful, and accomplished from a vast array of fields, including Angelina Jolie and Brad Pitt, Madonna, Damien Hirst, Alexander McQueen, Daphne Guinness, Beyoncé, Karl Lagerfeld, Kate Moss, the Beckhams, Tilda Swinton, and Jackie Kennedy. In addition to a foreword by the book’s editor, Stefano Tonchi, W: The First 40 Years also includes newly commissioned essays from writers Lynn Hirschberg, Marian McEvoy, and Vince Aletti. Longtime W contributor Christopher Bagley has edited the text and written revealing captions that draw upon the magazine’s most memorable interviews and reporting.

“W: The First 40 Years (Abrams, $75) recounts how the publication captures both the high and low sides of society, from Kate Moss and Kim Kardashian, to layouts on the lavish homes of Ann and Gordon Getty and Karl Lagerfeld. With the future of printed magazines far from certain, it’s fun to look back at an era when 58-page spreads of Madonna were not only permitted but indulged.” —The Denver Post

Stefano Tonchi assumed the position of editor in chief at W in 2010. He was previously the creator and editor of T: The New York Times Style Magazine.