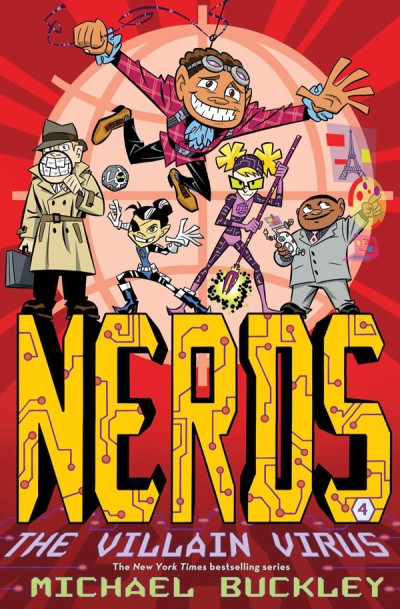 Supervillain (and former NERD) Heathcliff Hodges transformed himself into an all-powerful giant head, and now he’s unconscious in the HQ basement, where he can’t cause any more trouble . . . right?

Though Heathcliff’s knocked out, the villain population skyrockets in just a few short days. Normal people get a cold and then suddenly develop insane alter egos and come up with elaborate plans to take over the world. Even the NERDS are vulnerable to the spread of villainy—all except hyperactive Julio “Flinch” Escala. But he’s never led the team before. Can he focus on more than his next candy bar . . . and
save the world?

Michael Buckley is the bestselling author of the Sisters Grimm and NERDS series and a new picture book, Kel Gilligan’s Daredevil Stunt Show. He has also written and developed shows for Cartoon Network, Nickelodeon, and Discovery Channel. He lives in Brooklyn. Visit www.TeamNerds.com.