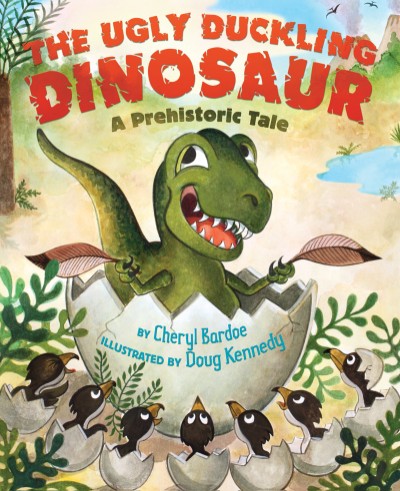 Once upon a time, seven tiny duck beaks pecked their way out of their eggs, but the eighth egg was a little bit different. What emerged wasn't a duck at all--he was a dinosaur!

Everyone notices how different he is. He doesn't waddle! His teeth are too big! Feeling ugly and outcast, the dinosaur duckling leaves his family and ventures out on his own. Again and again he tries to make friends, but everyone runs away! Over time he grows bigger and bigger but still can't seem to find his rightful place. One day he unexpectedly comes across other dinosaurs that look just like him, and he discovers he's really a T. rex!

This humorous and charming take on The Ugly Duckling also includes an author's note about the dinosaurs depicted and the early ancestors of modern ducks who lived side by side, and features scientifically accurate illustrations of the creatures.

“The extensive appended notes, including details of recent fossil findings, and a bibliography will grab dinosaur buffs and widen this title’s potential for curricular sharing.” –Booklist

Cheryl Bardoe is a former senior project manager of exhibitions at the Field Museum in Chicago. She is the author of Gregor Mendel and Mammoths and Mastodons and lives in Chicago. Doug Kennedy has illustrated a number of books, including the Pirate Pete series. He lives in Austin, Texas.