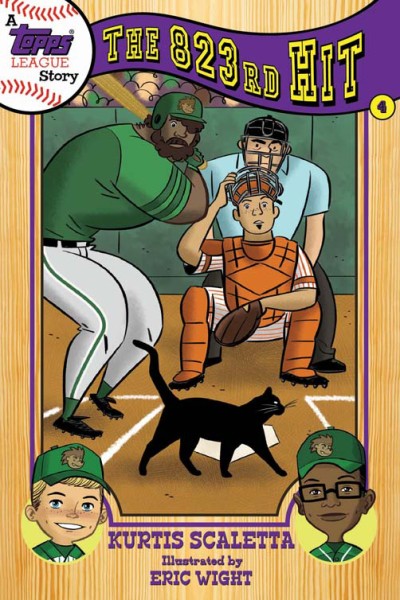 These fun, illustrated early chapter books feature the adventures—and misadventures—of the Pine City Porcupines, a hapless baseball farm team, and their two batboys: Chad, an avid baseball fan with a huge baseball card collection, and Dylan, who doesn’t know a thing about the sport. The fictional series has a unique twist: Chad solves problems by using information from Topps cards of real figures from modern baseball history.
Teddy “Bear” Larrabee, a slugger on the Pine City Porcupines, gets his 823rd base hit on his birthday, August 23—and it’s a home run! The Bear is a big believer in the power of numbers, so he asks Pines batboy Chad to retrieve the ball from the stands. There’s only one problem: the crabby fan in the ballpark who caught it. Chad really wants to keep the Bear happy and slugging, so he’s just got to figure out what the fan would be willing to trade for that 823 ball.