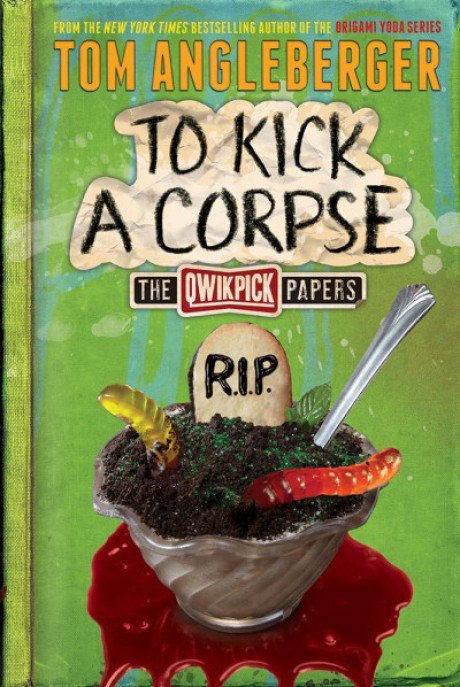 Buy
To Kick a Corpse
The Qwikpick Papers
By Tom Angleberger

This hilarious, highly original series, which so astutely captures the odd preoccupations of middle schoolers, will appeal to the many fans of the Origami Yoda series and gross-out classics such as How to Eat Fried Worms and Freckle Juice. Lyle Hertzog and his friends Marilla and Dave are the Qwikpick Adventure Society, three kids who seek out big adventures in their seemingly quiet hometown of Crickenburg. Tour a sewage plant? They’ve done it. Break into an abandoned research facility to spot a rat with a human face? Check. But their third exploit just might be their most daring yet. Local legend has it that a slave master was buried standing up in the plantation’s family tomb. Why? So that he could continue overseeing his slaves—even in death! When the Qwikpickers hear about this, they decide it’s high time to administer some 200-year-overdue justice and knock him down. Mission Kick a Corpse is on.

“The author offers a gigglefest of minor mishaps…a knee-slapper… Angleberger’s back for another round of high-energy off-color humor—need we say more?”
— Booklist

Tom Angleberger is the author of the bestselling Origami Yoda series, as well as Horton
Halfpott and Fake Mustache, both Edgar Award nominees; the Qwikpick Papers series; and the Inspector Flytrap series. He lives in Christiansburg, Virginia, with his wife, author/illustrator Cece Bell. Visit the author at www.origamiyoda.com.