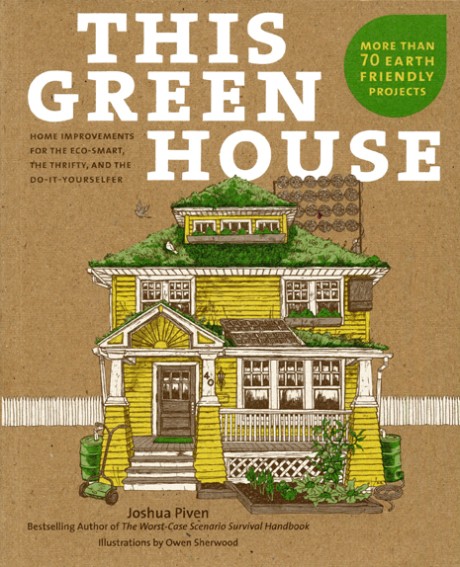 Home Improvements for the Eco-Smart, the Thrifty, and the Do-It-Yourselfer

Just the thought of "going green" can make you feel blue. Trying to live sustainably sounds like a whole lot of work and a whole lot of deprivation. Well, Josh Piven aims to both shrink your carbon footprint and soothe your eco-anxiety. In a guidebook that's as funny as it is practical, Piven shows you how to green every room of the house—and have a good time doing it.

Projects range from the playful (raising trout in your swimming pool) all the way to big-time, serious home alterations (installing a root cellar) that will have your neighbors green with envy. Don't fret if you're not a natural wrench-turner: Most of Piven's suggestions are inexpensive, totally approachable, and accompanied by clear illustrations. This Green House is likely to be the most entertaining homeowner's manual you've ever used.

Joshua Piven is the New York Times bestselling author of The Worst-Case Scenario Survival Handbook series. He has appeared on numerous television programs as a survival expert, including Today, ABC News, CNN, and the BBC.

Owen Sherwood, a graduate of Pratt Institute, is a freelance illustrator whose clients include Harper Collins, The Guardian, and FT Magazine. He lives in Troy, New York.