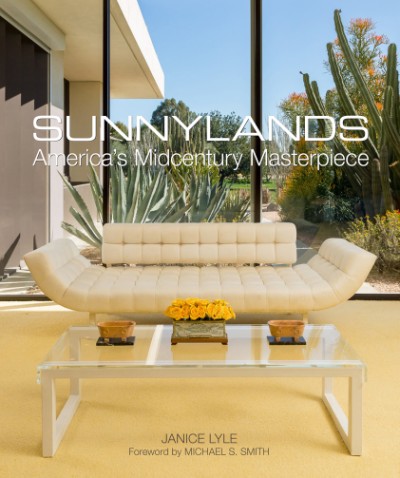 With its pastel green and yellow interior, its dazzling collection of Impressionist paintings, and long, low sofas that look like vintage Cadillac convertibles, Sunnylands was a Versailles for the Space Age. In Palm Springs, the mecca of midcentury modern architecture, this immaculately preserved estate is considered the undisputed masterpiece, envisioned by A. Quincy Jones, one of California’s most important architects, and furnished by California’s great decorator-to-the-stars, William Haines. Built by media moguls, art collectors, and diplomats Walter and Leonore Annenberg, Sunnylands became a seat of power where politicians, movie stars, and corporate leaders could meet, relax, reflect, make deals, and run the world—all with nobody watching. For four decades, an invitation to New Year’s Eve at Sunnylands was the ultimate social prize. Exquisitely illustrated, Sunnylands is a must-have for every fan of midcentury design.

"Imagine what treasures await in this history of [Walter Annenberg's] fabled midcentury modern house in Rancho Mirage, California, which is now restored and open to the public. Completed in 1966 by the architect A. Quincy Jones, with rare preserved interiors by William Haines, the 32,000-square-foot Sunnylands attracted presidents, royalty and Hollywood moguls to its glassy rooms with pale clusters of low furniture."
The New York Times —

"Sunnylands: America's Midcentury Masterpiece brings back to cocktail-fueled life the pink-roofed winter estate of Walter and Lee Annenberg. . . . At this Palm Springs oasis, U.S. presidents and the queen of England lounged on buttercream sofas and admired Impressionist paintings on walls the color of after dinner mints."
Elle Decor —

"The book's pages include original plans for the home, snapshots of its midcentury furnishings and impressive art collection, and scrapbook-like photos of well-known faces kicking back and having fun. . . . An ode to many things, every page of this book will draw a wistful smile."
Houston Chronicle —

Janice Lyle, the Director of Sunnylands Center & Gardens, has been at the estate since 2008.
Michael S. Smith is an American interior designer responsible for the 2010 makeover of the Oval Office and the private quarters of the Obamas.
Mark Davidson photographs for the Smithsonian, Getty Museum, and Hammer Museum.