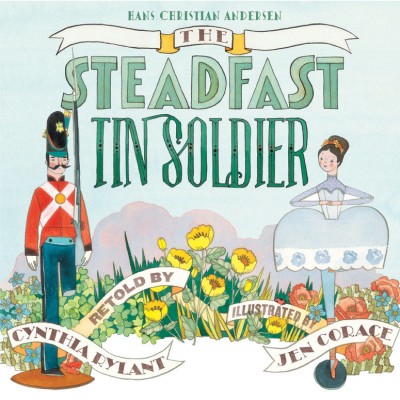 With her signature warmth and lyricism, Newbery winner Cynthia Rylant has crafted a new version of the classic Hans Christian Andersen fairy tale about a tin soldier who falls in love with a ballerina. As in the original story, the tin soldier's love for the beautiful ballerina is thwarted by a goblin. The tin soldier is separated from the other toys and washed down a sewer, where he encounters a rat and gets swallowed by a fish, but somehow, against all odds, he manages to end up back home only to be cast into the nursery fire. Rylant adds her own twist to the end of the tale, however, for in this version, the tin soldier and the ballerina are melded to each other, rather than melted, in the heat of the fire, so they'll never be parted again. Rylant's expert storytelling paired with Corace's stunning illustrations create a beautiful, unforgettable tale of everlasting love.

Praise for The Steadfast Tin Soldier
STARRED REVIEW
"Rylant preserves the story's character-building insistence on the soldier's decorum throughout his ordeal. At the same time, the sight of him in his dress uniform, bayonet at the ready, lodged upside down in a garden bed or lying patiently in the belly of the huge fish will make readers smile."
—Publishers Weekly, starred review

"Gracefully written... The book's large format gives plenty of scope for Corace's distinctive illustrations, precise ink drawings brightened with watercolor, gouache, and acrylic paints. Sometimes brilliantly colorful and sometimes more subdued, the scenes can be crowded with dozens of toys or other visual elements, but they show up well from a distance. The subtle depictions of the goblin and his shadow are particularly fine. A softened vision of the literary fairy tale."
—Booklist

"The distinctive illustrations capture both the story's melodrama and playful appeal, such as when two boys salute the tin soldier as his newspaper boat speeds along the fast-moving gutter stream. This spirited retelling reinvigorates this classic tale."
—School Library Journal

"Rylant is an appealing storyteller, and though she lets the soldier stay "forevermore" with the little dancer, that romantic outcome may suit those who find the Dane's bittersweet ending hard to bear."
—HornBook

"Corace uses a largely pastel-color palette to match the author's words. Mixed media flesh out the story. Their work together provides a powerful presentation in this oversize picture book. This is an excellent choice to compare with other versions of the classic tale."
—Library Media Connection

Cynthia Rylant is a two-time Newbery winner and the author of more than 100 books for children, including All in a Day. Jen Corace received her BFA in illustration from the Rhode Island School of Design and has illustrated a number of children’s books, including Little Pea. Visit her at jencorace.com.