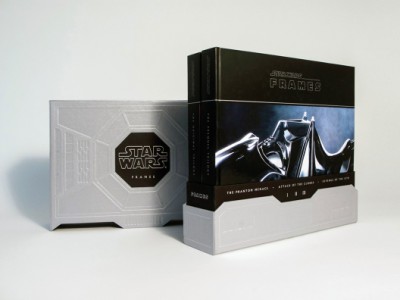 After George Lucas finished work on Star Wars Episode III: Revenge of the Sith, he wanted to look back on the Star Wars saga with an entirely new point of view: isolating stills, or frames, from each of the six Star Wars films, focusing on them intensely as works of photography and design, and reproducing them in a book. For two years Lucas went through more than 150,000 frames per film, editing more than 1 million frames down to the 1,416 images that now comprise Star Wars: Frames, a testament to the hard work, craftsmanship, and dedication evident in every frame of every film. Star Wars: Frames brings together Lucas’s personal shot-by-shot selections into a lavishly designed two-volume hardcover set—one volume for the Original Trilogy and one volume for the Prequel Trilogy. For collectors and fans, Star Wars: Frames is the ultimate look on this grand project devoted to a cinematic phenomenon—and the ultimate Star Wars collector’s tome.

Please note: All the images in Star Wars: Frames are presented as they are seen on screen, with none of the alterations that usually take place when an image is released for publication (digital enhancements, airbrushing, and so on). They will therefore have, occassionally, motion-blur or other anomalies inherent in a 1/24th-of-a-second extraction. Each double-page spread of frames is intended to be viewed from left to right top, then left to right bottom.

“George Lucas and company pored over the Star Wars films to distill the story into its visual essence and packaged the resulting images in the new book, Frames.” —Fast Company’s Co.Create blog

“This edition is solid.” —Gizmodo


George Lucas is the creator of the Star Wars films.

Guillermo del Toro made his feature directorial debut in 1993 with Cronos.  Since then, he has gone on to direct Mimic, The Devil’s Backbone, Blade II, Hellboy, Hellboy II, and Pan’s Labyrinth, which garnered enormous critical praise worldwide and won three Academy Awards®.  His novels The Strain and The Fall, with Chuck Hogan, are international best sellers.