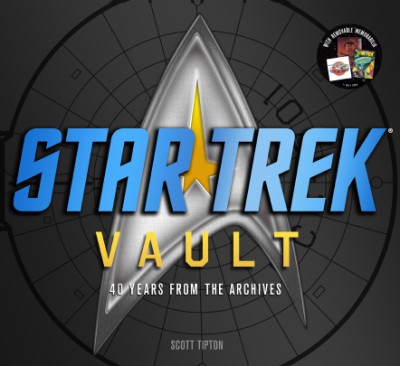 Star Trek Vault charts the remarkable history of the world's most popular science fiction series, examining the franchise's first 40 years. Covering all six Star Trek television series and the ten original feature films, the book highlights the far-reaching social and scientific optimism that underpins the franchise, dwelling on milestones such as its groundbreaking mixed-race casts and technologies that have since become commonplace, before taking an in-depth look at the making of each series and movie. Fully illustrated with more than 350 images, and including 13 interactive reproductions of the most fascinating memorabilia from the CBS archives--on-set signage, hand-drawn storyboards, blueprints for Picard's captain's chair, and a vintage T-shirt transfer--Star Trek Vault provides a broad perspective on the voyages of Captains Kirk, Picard, Sisko, Janeway, and Archer. The ultimate treasure trove of Star Trek imagery and memorabilia, Star Trek Vault is sure to appeal to both the casual and the die-hard fan.

Praise for Star Trek Vault:
“[A] treat for your inner Trekkie. It’s the perfect gift whether you are a fan of Kirk or Picard. Or Janeway . . . we guess.” —Entertainment Weekly