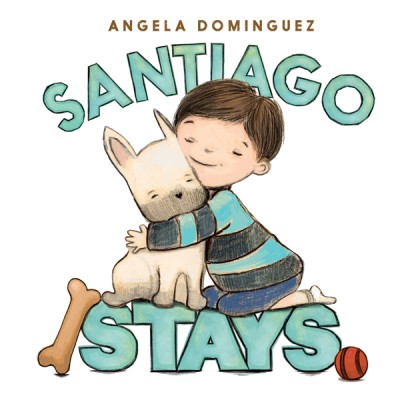 Santiago stays. He does not budge when offered a walk. He does not budge when offered a treat. Not even a turkey leg can lure this stubborn French bulldog away from his post, despite the growing disappointment of the little boy who is trying to engage him. After several futile attempts, the boy's frustration bubbles over into a yell, which wakes the baby, and the reader realizes whom Santiago has been resolutely guarding all along. This familiar theme of an attention-seeking older sibling, paired with the comically and characteristically stubborn French bulldog, makes for a humorous and cathartic tale for dog lovers of all ages!

"Dog lovers and older siblings alike will bask in the quiet humor as they try to solve this gentle canine mystery."
--Kirkus Reviews

"The idea that there's a dog who cares more about a crying baby than a hamburger is a heartwarming one; Santiago isn't just cute but, in his own small way, noble, too."
--Publishers Weekly

"The large, mixed-media illustrations set against white backgrounds pack much nuance and personality into the canine and human characters."
--School Library Journal