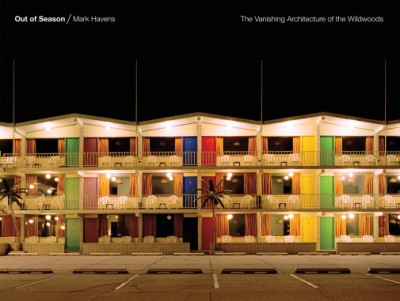 Buy
Out of Season
The Vanishing Architecture of the Wildwoods
By Mark Havens
Essay by Jamer Hunt, and Joseph Giovannini

Wildwood, New Jersey: thanks to a combination of economics, geography, and chance, this Jersey Shore vacation spot has, for more than four decades, been home to a wealth of immaculately preserved midcentury motels. These jewels of neon and bright colors remained frozen in time until recently; now, a substantial number have been demolished and many that remain face an uncertain future. Determined to preserve them, photographer Mark Havens has captured their unique style over 10 years, sometimes shooting motel facades while workers were demolishing the backs. With essays by Joseph Giovannini and Jamer Hunt and evocative photographs, Out of Season celebrates the architecture of a bygone era of Jersey Shore summers.

"Captured over ten years, Philadelphia-based artist Mark Havens gives the motels of the New Jersey city of Wildwood a different moment in the spotlight, away from the off-highway, cheap and tacky film references that popular culture associate them with. Essentially a revolutionary architectural diary, the new tome titled Out of Season: The Vanishing Architecture of the Wildwoods historically marks a dialogue that is comparable to many mid-century modern architects."
— Wallpaper

"Out of Season: The Vanishing Architecture of the Wildwoods traces the vibrant 1950s architecture that once shaped the area and is now disappearing at the hands of developers."
— Hero

"Ten years in the making, this photo collection showcases the motels of Wildwood. . . . The photos offer details large and small: not simply obvious icons such as neon signs but close shots of roof and window composition, and studious attention to the often socializing-oriented courtyard or pool-focused motel designs. The book is in some sense a catalogue of kitsch, but with much of its subject imperiled, it serves as a call for preservation as well."
— Publishers Weekly

"Photographer Mark Havens captures the beauty of each space through small details, from the specific placement of each chair to the unbroken symmetry between every window and door. The book is Havens's decade-long project, composed of dozens of images, documenting the mid-century hotels in this seaside town, some still standing, others repurposed, and many that eventually succumbed to demolition."
— Modern Magazine

"Over a 10 year period, photographer Mark Havens explored the Wildwoods motels at their quietest moments. The book sequences the photographs from dawn to night. There are no people, no sun-seekers or tourists: just evocative photographs of a unique and vanishing form of architecture."
— Atlas Obscura

"This book takes a look at the prime coastal location of Wildwood, but not for the sweet boardwalk and sandy dunes--rather, the extraordinary well-preserved midcentury motels that dot the town. . . . photographer Mark Havens managed to capture the underlying kitschy spirit of each one."
— Interview

"Havens' book is a quiet but striking reminder of Wildwood's glory days as not only the epicenter of summer vacations in the mid-Atlantic, but of the bold moves of developers and architects alike during the 50s and 60s."
— Curbed.com

"At a time when luxury towers and cookie-cutter condo and retail sites now dominate America's landscapes, older buildings often fall victim to gentrification. Thankfully, Philadelphia-based photographer Mark Havens has embarked on a 10-year exploration to preserve the memory of some of the nation's most colorfully eclectic and iconic architecture: the vanishing motels of the Jersey Shore's Wildwood."
— The Daily Beast

"The photographer Mark Havens spent a decade photographing mid-century architecture along the New Jersey coast. . . More than 100 of those images have been compiled into a book. . . .[Havens] photographed the buildings at the beginning or end of the season, when artificial palm trees still bent over the decks, and the pools were still full of water."
— CityLab

"Mark Havens spent his childhood exploring the Jersey Shore's kitschy jewel: Wildwood. Once home to the country's largest concentration of midcentury hotel architecture, the barrier island's distinctive plastic-palm facade has given way to modern condominium development. . . He started photographing the tourist destination nearly 10 years ago, capturing the kidney-shaped pools, the looping neon signs, and the barrage of faded colors before they were gone."
— The Atlantic

"Can't get to the beach before the end of summer? Flip through the pages of Philadelphia artist Havens' cool photo book. It captures the vintage modernist architecture of Wildwood on the Jersey Shore. . . . Slather on the sunscreen, pour yourself a cold one and enjoy."
— New York Post

"Some love the Jersey Shore for the sea and sand, others for the boardwalks. Photographer Mark Havens' favorite think about the shore is a bit less predictable: the architecture. In his new coffee-table book, Out of Season, Havens--a regular on the beaches of Wildwood, New Jersey--presents a collection of more than 100 photos of the stunning midcentury-modern motels of Wildwood."
— DuJour

"Mark Havens' love for the Wildwoods' motels has been a consuming passion for the last 10 years. . . . Havens hope the new book that reflects his admiration for Wildwood motel architecture will increase peopl's appreciation for the examples that remain. . . Out of Season: The Vanishing Architecture of the Wildwoods features 105 photos spread over 224 pages."
— The Press of Atlantic City

Mark Havens’s photographs have been published and exhibited internationally. Reviews of his work have appeared in publications ranging from the New York Times to The Paris Review. He is a professor at Philadelphia University.
Jamer Hunt is Director of the Transdisciplinary Design Graduate Program at Parsons the New School for Design. He is a design blogger for Fast Company and co-founder of DesignPhiladelphia, now the largest city-based design festival in the US.
Joseph Giovannini has written on architecture and design for three decades for such publications as the New York Times, Architectural Record, Art in America, Art Forum, and Architecture Magazine. He has also served as the architecture critic for New York Magazine and the Los Angeles Herald Examiner.