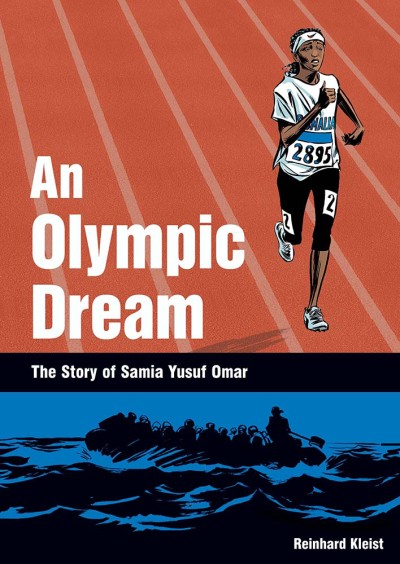 The image of Samia Yusuf Omar running for last place at the 2008 Beijing Olympics will forever be imprinted in the minds of all who saw it: The lean Somalian, wearing knee-length leggings and a baggy T-shirt, came in seconds behind her competitors. What the cheering crowd couldn’t know then was what it took to get there. An Olympic Dream follows Omar’s second attempt to represent her country at the Olympics, this time in London. Reinhard Kleist pictures the athlete training in one of the most dangerous cities in the world; her passage through Sudan and into Libya; and her fateful attempt to reach Europe. By telling the story of one remarkable woman, Kleist gives voice to the thousands of migrants who risk their lives daily for a better future.

Reinhard Kleist is a renowned artist and graphic novelist. The Boxer, his depiction of Holocaust survivor Harry Haft, was nominated for an Ignatz Award and made the Young Adult Library Services Association’s 2014 Great Graphic Novels for Teens list. His acclaimed biography Johnny Cash: I See a Darkness was nominated for an Eisner Award. Kleist lives in Germany.