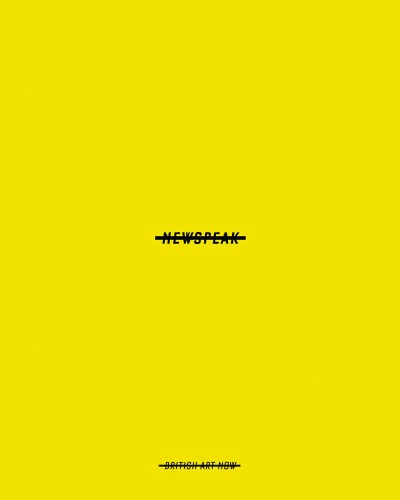 Published to accompany an exhibition opening at the Saatchi Gallery, London, in June 2010, Newspeak: British Art Now features an exciting array of up-and-coming British artists selected by renowned collector Charles Saatchi. As he did for Damien Hirst, Tracy Emin, and many others with his Sensation show, Saatchi stands to launch the careers of a new generation of artists with this provocative collection.

One of the more than 50 featured artists has been selected from a BBC2 reality television series, Saatchi's Art Star, during which six artists trained with some of the most influential names in the art world today. Saatchi selected only one to exhibit in Newspeak and travel to Russia, where the show opens at the State Hermitage Museum before moving to London. Patricia Ellis, an artist and curator who has worked with the Saatchi Gallery since 1998, provides the foreword and world-renowned designer Jonathan Barnbrook adds his touch: in the dark, the fluorescent green cover changes colors to reveal a new design.

Patricia Ellis, an artist, writer, and curator, has contributed to many international art magazines and exhibition catalogues. She is Associate Lecturer in Contextual Studies at the University of the Arts, London and a Specialist Advisor to the Scottish Arts Council. Jonathan Barnbrook is among the most well-known and highly regarded graphic designers at work today.  His London firm, Barnbrook Design, has been producing innovative work since 1990.