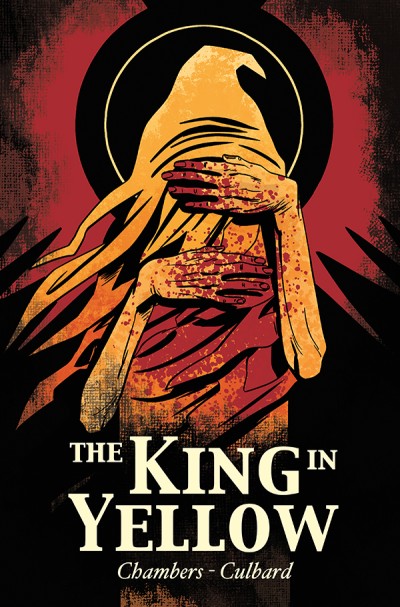 Buy
The King in Yellow
By Robert W. Chambers
Adapted by I.N.J. Culbard

The supernatural stories that make up Robert W. Chambers’s classic piece of weird fiction are tied together by a play that brings madness to all who read it: The King in Yellow. It’s a book that draws readers in with an irresistible yet innocent opening act, then drives them insane with the poisonous words of Act 2. It’s a book that cannot be suppressed, spreading like a disease from city to city, continent to continent. An influence on writers from H. P. Lovecraft to Neil Gaiman, The King in Yellow is one of the most important works of American supernatural fiction. In this dangerously unputdownable graphic-novel adaptation, I. N. J. Culbard brings to life a thrilling tale of horror that will make readers laugh and cry and tremble with fright . . . Read at your own risk.

“Clean lines, bold colors, and characters that wriggle right into the readers’ brain are Culbard’s trademark. In the realm of The King in Yellow, those skills are put to dastardly use as what begins in intrigue ends in poisonous insanity and palpable fright.”
— Publishers Weekly

“Essential for all readers of Lovecraft. Adults and teens who are fans of old-school horror will delight in these macabre tales.”
— Library Journal online

“A book that’s so deeply in love with language and the unseen doesn’t leave very much for an illustrator to work with. Culbard’s style is well-suited to this difficulty—it’s defined as much by what it doesn’t show as by what it does. Instead of laying on the Victorian gingerbread, Culbard creates spare, almost modernist tableaux.”
— NPR.org

I. N. J. Culbard is an award-winning artist widely known for his graphic adaptations of classics. He collaborated on a critically acclaimed Sherlock Holmes series with

author. After studying art in Paris, he worked as an illustrator in New York for Life, Vogue, and Truth magazines. With the immediate success of The King in Yellow, he became a full-time author, publishing more than 70 books.