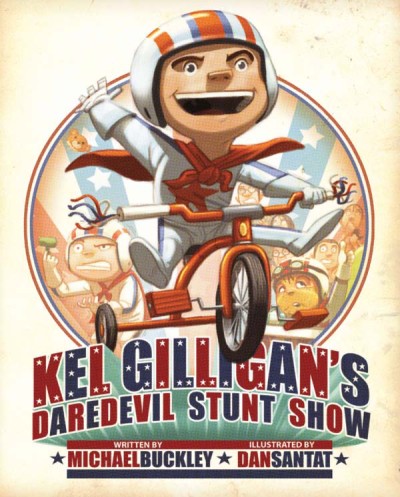 From Michael Buckley, the bestselling author of the Sisters Grimm and NERDS series, and Dan Santat, author-illustrator of Sidekicks, comes this hilarious picture book starring Kel Gilligan (a.k.a. "The Boy Without Fear") that encourages kids to laugh at their fears and celebrates the bravery it takes to try new things no matter how ordinary. Narrated by Kel himself as he attempts his "stunts" with Evel Knievel–like flair, the story unfolds as a performance in which readers themselves become part of the audience, encouraging Kel to get dressed all by himself (without a net!), eat new foods like broccoli (eww!), and take a bath (gasp!). Bold, interactive, and downright silly, this is a book to make kids cheer and attempt some "stunts" of their own.

Praise for Kel Gilligan's Daredevil Stunt Show:
"The stunned faces on the 'audience' as Kel successfully chews and swallows broccoli are hilarious, and their comments will inspire many giggles... the intended audience will be rolling on the floor laughing at these silly antics... Santat's illustrations, are busy, grandiose, loud, and proud, just like Kel Gilligan. They add depth and humor to the action."
—School Library Journal

"Expect demands for multiple readings."
—The Bulletin of the Center for Children's Books

"A fantasy romp destined to please preschoolers and parents alike who are faced with getting through the day-to-day tasks that at times feel insurmountable."
—Booklist

Michael Buckley is the bestselling author of the Sisters Grimm and NERDS series. This is his first picture book. Dan Santat is the award-winning illustrator of Attack of the Fluffy Bunnies, Oh No!, Sidekicks, and Guild of Geniuses. Visit him online at www.dantat.com.