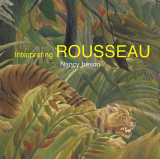 Henri Rousseau (1844-1910) is at once one of the most popular and most enigmatic of artists. "Interpreting" his work was no less difficult for his contemporaries than it is for us today. Different accounts of his life and art make him out to be either the starting point for modernism or a naïve, "primitive" artist, cut off from the world around him. What was it about his paintings that fascinated contemporaries like Picasso and the Surrealists? And what was it about his personality and social status that meant he never became part of the avant-garde?

Revealing some of the truths behind the myths, Interpreting Henri Rousseau is richly illustrated throughout.

Nancy Ireson is a freelance writer and doctoral research student at the Courtauld Institute of Art in London. She has published work on Rousseau in The Burlington Magazine and Apollo.