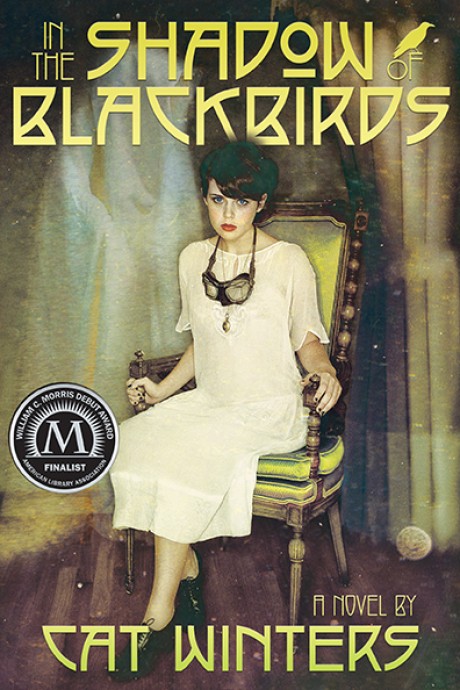 In the Shadow of Blackbirds

In 1918, the world seems on the verge of apocalypse. Americans roam the streets in gauze masks to ward off the deadly Spanish influenza, and the government ships young men to the front lines of a brutal war, creating an atmosphere of fear and confusion. Sixteen-year-old Mary Shelley Black watches as desperate mourners flock to séances and spirit photographers for comfort, but she herself has never believed in ghosts. During her bleakest moment, however, she's forced to rethink her entire way of looking at life and death, for her first love—a boy who died in battle—returns in spirit form. But what does he want from her?
Featuring haunting archival early-twentieth-century photographs, this is a tense, romantic story set in a past that is eerily like our own time.

Praise for In The Shadow of Blackbirds
STARRED REVIEW "Winters's masterful debut novel is an impressively researched marriage of the tragedies of wartime, the 1918 flu epidemic, the contemporaneous Spiritualism craze, and a chilling love story and mystery."
—Publishers Weekly, starred review

STARRED REVIEW "More than anything, this is a story of the breaking point between sanity and madness, delivered in a straightforward and welcoming teen voice."
—Booklist, starred review

"This engrossing combination of historical fiction, ghost story, psychological thriller, and straight-up whodunit moves between genres with stunning ease, maximizing the tropes of each to satisfying effect."
—The Bulletin of the Center for Children's Books

"Mary Shelley is a likable, sympathetic heroine, and through her story, teen readers will get a glimpse of a fascinating time period, made all the more real by the haunting historic photographs that pepper the novel, from soldiers in trenches to policemen in gauze masks. Part romance, part mystery and part ghost story, In the Shadow of Blackbirds makes palpable a terrifying time that brought the horror of death into the homes of millions."
—Bookpage

"One of the creepiest (in a good way) covers of the season! What's inside, historical Y.A. set at the time of the Spanish influenza, is equally haunting."
—The Atlantic Wire

"Romance fans will love Stephen's ghostly visits to Mary Shelley, confirming that their romance is as steamy as ever. Mystery lovers will enjoy the satisfactory resolution of the puzzle. Recommend this title to fans of Libba Bray's The Diviners."
—VOYA

"In this book, the passion of first love and the paranoia of the times are realistically and movingly rendered."
—The Oregonian

"Beautifully written and absolutely riveting. I enjoyed everything about this book."
—The Statesman Journal

Cat Winters was born and raised near Disneyland in Southern California. She is the creator of suburbanvampire.blogspot.com, and she runs corsetsandcutlasses.wordpress .com, a group blog featuring authors of YA historical fiction. She lives in Portland, Oregon, with her family.