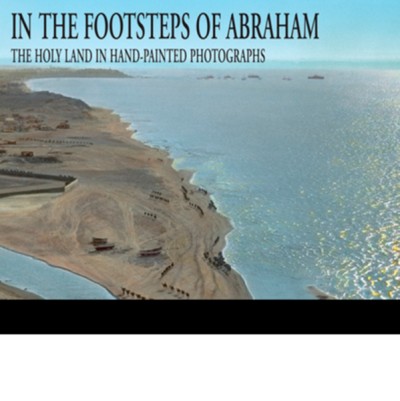 Buy
In the Footsteps of Abraham
By Richard Hardiman, and Helen Speelman

Its position as the birthplace of the three major Abrahamic faiths--Christianity, Judaism, and Islam--gives it a special place in the hearts of millions. Rarely does a book come along that captures this extraordinary land in a fresh light. In the Footsteps of Abraham does just that, presenting a unique opportunity to experience the Holy Land as it was at the turn of the last century, before the region underwent the radical changes of modernization. These vivid images evoke the Holy Land of centuries ago, as Moses or Jesus might have seen it. The photos were taken before the advent of color photography by the Matson Photo Agency, part of Jerusalem's American Colony, a community of Christian expatriates. In the 1920s, Ari Speelman, a devout Dutch Christian, commissioned the hand-coloring of 1200 photos on glass plates, a massive undertaking that sometimes involved painting with a single human hair. In this era before mass tourism, he traveled through Holland giving popular lantern slide lectures. His remarkable collection was bequeathed to the Jewish Historical Museum in Amsterdam; the photos in this book were selected from that legacy.