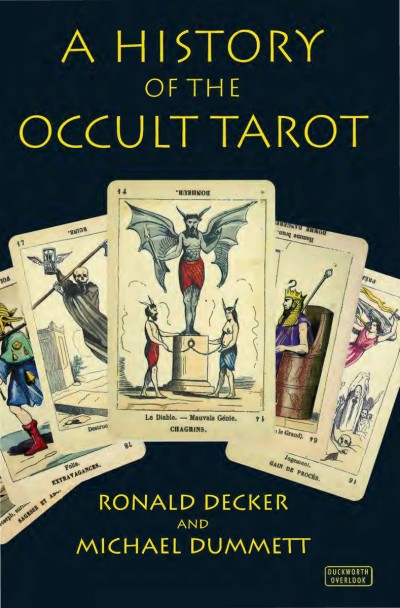 Buy
A History of the Occult Tarot
By Ronald Decker, and Michael Dummett

Starting with the late 19th century, the authors—art historian and antique card curator Ronald Decker and former Oxford logic professor Michael Dummett—examine how the Tarot went from a deck used simply for card games to being the favored divination tool of occultists, a bridge to the spirit world, and even a map of the unconscious mind.                   Looking at the people and organizations who adopted the Tarot, ranging from the Theosophical Society and Aleister Crowley to the Order of the Golden Dawn and P.D. Ouspensky, this compelling scholarly look at Tarot's occult history describes many of the fascinating decks used by occultists as well as the secret histories of magical and occult groups of the late 19th century through contemporary times. It is one of the essential histories of the subject and a key volume for the libraries of all serious students of Tarot.