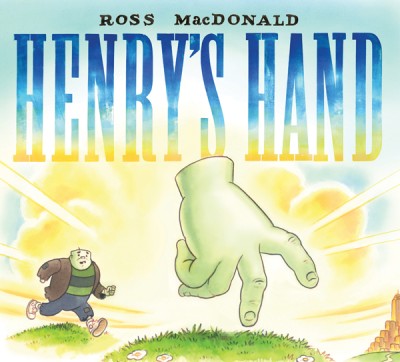 Henry's Hand is a story about the friendship between Henry, a giant, and his right hand. You see, Henry sometimes has trouble keeping track of his body parts—everything from his ears to one of his legs can fall off. Once, his eye even rolled under the couch and wouldn't come out until bedtime. But with help from Hand, Henry keeps himself together. In fact, Henry and Hand are the best of friends . . . that is, until Henry takes Hand for granted, pushes him too far, and Hand runs away. A charming tale of friendship, forgiveness, and loyalty, Henry's Hand is also a quirky story for readers of all ages, especially those of us who know what it feels like to fight with your best friend.

"A charming story with wonderful illustrations—give Ross and Henry a hand!"
—Patrick McDonnell, Caldecott Honor–winning author/illustrator of Me . . . Jane and creator of Mutts

"Clever, moving, and funny. What more can you ask for in a beautifully illustrated children's book?"
—Graydon Carter, editor of Vanity Fair and father of five

"In Ross MacDonald's world, fiendishly silly things happen as a matter of course. In Henry's Hand, our weirdly lovable hero is falling apart—literally—and chasing after the pieces. Only Henry is more human than he appears to be—which can't always be said about the rest of us!"
—David Small, author/illustrator of Stitches, a National Book Award finalist and #1 New York Times bestseller

STARRED REVIEW
"A good old-fashioned man/appendage love story for the ages… Kids will come for the monster and the disembodied hand. They'll stay for the story."
—Kirkus Reviews, starred review

"All the pieces are in place, as it were, and MacDonald sets them in motion in a melodramatic plot that wraps up with a reunion worthy of applause—with both hands."
—Publishers Weekly

"It's a ridiculous and bizarre concept, but also filled with a lot of heart."
—School Library Journal

"Fresh and quirky tale about the bumps that occur even in the best of friendships."
—The Bulletin of The Center for Children's Books

Ross MacDonald is the award-winning illustrator of Hey Batta Batta Swing!; Another Perfect Day; and Hit the Road, Jack. His illustrations appear in Vanity Fair, the New Yorker, the New York Times, the Atlantic, Newsweek, Time, the Wall Street Journal, Harper’s, and Rolling Stone. He lives in Connecticut, where he operates Brightwork Press.