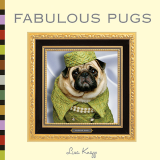 This pug can certainly strike a pose. With an unmatched talent for scenery chewing and a mug that can only be described as fetching, actress-model-pooch Charlie vogues her way through the warp and woof of history in this enchanting book of photos by Atlanta-based designer Lisa Knapp.

There's no role—male or female, world leader or screen goddess—that's too daunting for Charlie (and no costume that she's unwilling to squeeze her plus-size figure into). Wrapped in a toga, she's a formidable Julius Pugustus Caesar. As Attila the Pug, she proves herself equally comfy in barbarian togs. As an animal skinâ€“attired Cave Woman, she's savage. As a pillbox-hatted Jackie, she's the very image of sophistication. And when Charlie doffs it all as a platinum-tressed Lady Godiva, she sizzles. Napoleon Bonapug, Mao Tse-Pug, and bling-bedecked gangsta rapper Notorious P.U.G. are among her many other hilarious incarnations. Charlie's wardrobe—expertly researched and tailored by author and proud "pug parent" Knapp—is remarkable for the costumes' meticulous detail and historical accuracy. Fabulous Pugs will captivate fashionistas, amuse history buffs, and delight all the pug-lovers among us (and who isn't one, really?).

Lisa Knapp, an Atlanta native, studied fine art at Mercer University in Macon, Georgia, and graphic design at Georgia State University in Atlanta. She has worked as a designer in Nashville and Atlanta, and is currently working on a line of gift products and apparel for her company, Pug Daddy Productions.