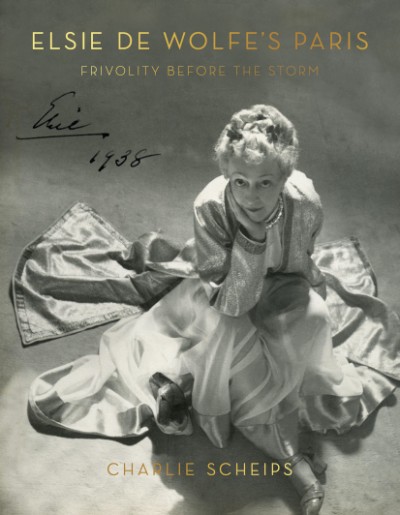 The American decorator Elsie de Wolfe (1858–1950) was the international set’s preeminent hostess in Paris during the interwar years. She had a legendary villa in Versailles, where in the late 1930s she held two fabulous parties—her Circus Balls—that marked the end of the social scene that her friend Cole Porter perfectly captured in his songs, as the clouds of war swept through Europe. Charlie Scheips tells the story of these glamorous parties using a wealth of previously unpublished photographs and introducing a large cast of aristocrats, beauties, politicians, fashion designers, movie stars, moguls, artists, caterers, florists, party planners, and decorators. A landmark work of social history and a poignant vision of a vanished world, Scheips’s book belongs on the shelf with Abrams’ classics such as Slim Aarons: Once Upon A Time and Tony Duquette.

“Scheips utilizes 170 black-and-white and color images—some previously unpublished—to visually illuminate his fascinating narrative of this peerless woman’s life, one that intersected with some of the most colorful and important characters of the day on both sides of the Atlantic, including Elsa Maxwell, William Randolph Hearst, Cecil Beaton, Janet Flanner, Gertrude Stein, and the Duke and Duchess of Windsor. The tome culminates with de Wolfe’s final grand fête, the second Circus Ball, which defined the glamour and decadence of international society before the lights went out all over Europe.”
— Gotham magazine

“A treasure trove of close to two hundred unpublished photographs of Elsie de Wolfe’s 1939 ‘Circus Ball.’ [Scheips has] used these as the centerpiece of a book like no other, Elsie de Wolfe’s Paris: Frivolity Before the Storm. On the surface, it’s a voyeur’s dream, a behind-the-scenes look at the high-water mark of a kind of entertaining that went extinct two months later, when Hitler invaded Poland. But more, it’s a deep dive, an x-ray of an elite Society that took dinner parties and balls as seriously as we take our work—because it was their work.”
— Head Butler.com

Charlie Scheips is a cultural historian who has curated exhibitions in the United States and Europe. He was the founding director of the Condé Nast Archive in New York. He lives in New York City.