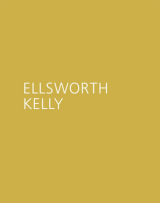 Without aligning himself fully to any particular art movement, Ellsworth Kelly (b. 1923) has continued in his singular quest to create an original abstract vocabulary. Unlike many of his contemporaries, he has never maintained a sharp divide between the natural and the abstract worlds, deriving his abstract forms from sources as disparate as cityscapes, the play of shadows on a wall, or the structure of plants. Christoph Grunenberg's insightful essay makes a major contribution to understanding the course of Kelly's development, explaining why he is widely seen as one of the greatest American painters of the second half of the 20th century.

Christoph Grunenberg is the Director of Tate Liverpool. His previous publications include The Summer of Love.