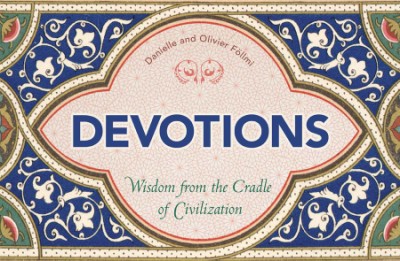 Buy
Devotions
Wisdom from the Cradle of Civilization
By Olivier FÃ¶llmi, and Danielle FÃ¶llmi

Devotions: Wisdom from the Cradle of Civilization is the sixth installment in Danielle and Olivier FÃ¶llmi's project Offerings for Humanity, which spans the world's cultures and traditions. In this new volume, the authors have traveled the Middle East and captured images from Morocco, Algeria, Egypt, Yemen, United Arab Emirates, Jordan, Israel, Lebanon, Syria, Iran, Afghanistan, and many other places. As in the other books, each photograph is accompanied by a quote for each day of the year.

Devotions presents not only religious quotes taken from the Koran, the Hebraic tradition, and Eastern Christianity, but also from noted authors such as the Sufi poet and jurist Rumi, the Persian writer and mathematician Omar KhayyÃ¡m, and the Lebanese-American artist Khalil Gibran. A daily dose of wisdom coupled with breathtaking photography, Devotions allows readers to move a little closer to the heart of the wisdom found in the Cradle of Civilization.

Danielle and Olivier FÃ¶llmi, doctor and photographer respectively, divide their time between the Alps and traveling around the world. Together they founded HOPE, an association dedicated to education in developing countries. They are the authors of many books, including Offerings: Buddhist Wisdom for Every Day.