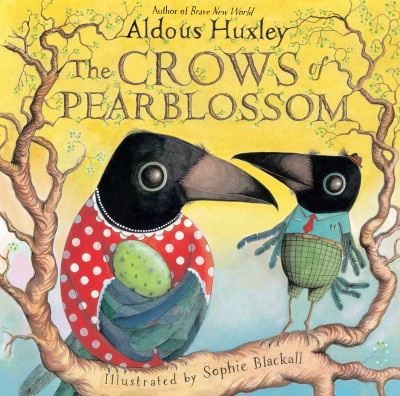 Sophie Blackall, illustrator of the Caldecott-Medal-winning book Finding Winnie, created standout illustrations for this timeless picture book. Written in 1944 by Aldous Huxley as a Christmas gift for his niece, The Crows of Pearblossom tells the story of Mr. and Mrs. Crow, who live in a cottonwood tree. The hungry Rattlesnake that lives at the bottom of the tree has a nasty habit of stealing Mrs. Crow's eggs before they can hatch, so Mr. Crow and his wise friend, Old Man Owl, devise a sneaky plan to trick him.

This funny story of cleverness triumphing over greed, similar in tone and wit to the work of A. A. Milne, shows a new side of a great writer. Paired with stunning illustrations by Caldecott-winner Sophie Blackall, this timeless tale is sure to grab the attention of many readers—adults and children alike.

Praise for The Crows of Pearblossom
“With Huxley’s mordant wit in ample supply, this tale will entertain literary novelty seekers.”
–Publishers Weekly

“A rather charming children’s book. The story is clever, wittily told and bristles with spiky humor — and it could quite possibly become a new favorite among schoolchildren. In the reissued edition, Brooklyn-based illustrator Sophie Blackwell transforms the chapter book into a picture book. Huxley’s standing as one of the grandfathers of dystopian Y.A. is already established. Perhaps the next generation will think of him as that guy who wrote about crows’ eggs.” –New York Times ARTSBEAT blog

Aldous Huxley (1894-1963), the author of Brave New World, lived the latter part of his life near the Mojave Desert, where this story is set. Sophie Blackall is the illustrator of many children's books, including the Ivy and Bean series. She lives in Brooklyn. Visit her at www.sophieblackall.com.