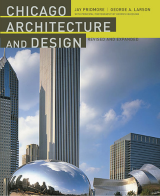 The birthplace of the skyscraper, Chicago is noted for an architectural tradition that has influenced building around the globe. Now the most authoritative text on the subject is completely redesigned, revised, and expanded to bring the history up to date—with an all-new final chapter on the signature works of the last 20 years, up to and including Frank Gehry's Millennium Park band shell, whose curling ribbons of stainless steel added a dazzling new facet to the city's skyline in July 2004. Some 300 photographs, principally the work of the renowned Chicago studio Hedrich Blessing, illustrate the book. More than half of the photos are new. Looking at famous structures from the inside out, the book has won praise for its emphasis on the graceful interiors of Chicago's finest buildings. The vivid text discusses the life and work of such towering figures as Daniel Burnham, Louis H. Sullivan, Frank Lloyd Wright, and Mies van der Rohe, as well as that of the many lesser-known builders who have contributed to Chicago's reputation as "an architect's city.

Jay Pridmore is a freelance writer and critic. George A. Larson is chairman and director of design of Larson Associates, Chicago and New York. Hedrich Blessing is one of the country's premier architectural photography studios.