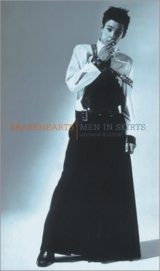 What do Mick Jagger, David Bowie, Prince Charles, Smashing Pumpkin Billy Corgan, and Boy George have in common? These and other sharp-dressed, sexually secure, 21st-century men are incorporating skirts into their wardrobes. In this provocative, one-of-a-kind book, Andrew Bolton traces the warrior origins of kilts and sarongs and reveals how, far from feminizing men, skirts actually reinforce their virility. Designers as diverse as Burberry and Dior, as well as mainstream labels like Levi's, have all created modern versions of the male skirt. Through interviews with such celebrity designers as Jean-Paul Gaultier, Bolton questions traditional interpretations of the item and examines its historical prototypes. Some 150 photographs illustrate this colorful salute to the growing numbers of the few, the proud, the men in skirts.

Andrew Bolton, author also of The Supermodern Wardrobe, is Victoria and Albert/London College of Fashion Research Fellow in Contemporary Fashion. He lectures, writes, and curates shows on the subject. The London Times has named Bolton one of the 25 most influential people working in fashion in Britain today.