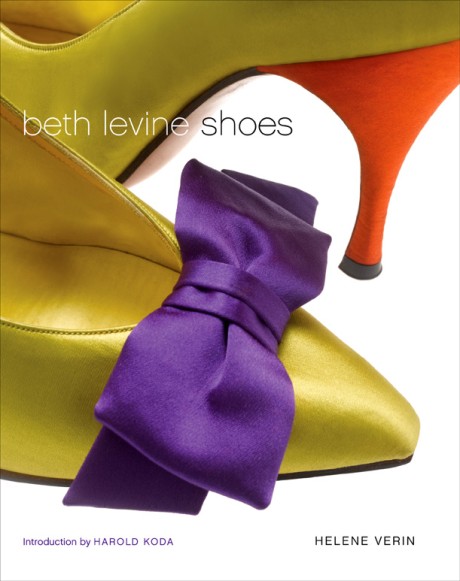 If you love shoes—and who doesn't?—you know that nothing says as much about a woman's style as her taste in footwear. Long before Jimmy Choo and Christian Louboutin, Beth Levine was designing shoes that were objects of desire and even lust.

Levine, who introduced mules, stilettos, and fashion boots to the American market, was a visionary. Born a farmgirl, she took her design inspiration from nature—and everything else: auto racing, patchwork quilts, even the 1969 moon landing. Fashion-forward and exquisitely constructed, Levine's shoes were worn by stars like Marilyn Monroe and Barbra Streisand, favored by designers like Halston, Oscar de la Renta, and Geoffrey Beene, and collected by Azzedine Alaïa and Manolo Blahnik.

This book's full-color photos of Levine's creations—from vinyl cowboy boots to sublime black silk pumps—display her shoes as touchstones of glamour and, ultimately, works of art.

"Before MANOLO BLAHNIK, there was the cutting-edge shoe designer BETH LEVINE (1914-2006). Stockinged boots that extended into a wrapped bodysuit, slides lined in Astroturf, and driving pumps in the forms of cars—all were part of her rich vocabulary, being celebrated in BETH LEVINE SHOES, by HELENE VERIN."
-Andre Leon Talley, VOGUE April 2009

Widely hailed as the ‘First Lady of American Shoe Design', Beth worked under her husband's label to create some of the most innovative and popular shoes of the 60' and 70's, including Nancy Sinatra's boots that walked all over you in her hit single, "These Boots Are Made for Walkin'."
-Callie Watts, BUST.com

I knew the name but not much about the woman, so when the book Beth Levine Shoes landed on my desk, I quickly flipped the pages, reading the quotes and staring at the shoes, so intricate, creative and whimsical… The book offers insight into arguably the most influential American shoe designer of the 20th century. The pictures alone are worth the $35 price.
-Linda Miller, The OKLAHOMAN, 3/29/2009

Helene Verin is a designer of shoes, wallpaper, rugs, pillows, and tiles, and her work has appeared in countless books and publications. Verin is an adjunct professor at the Fashion Institute of Technology in New York City, where she lives, and is a recognized expert on Beth Levine.