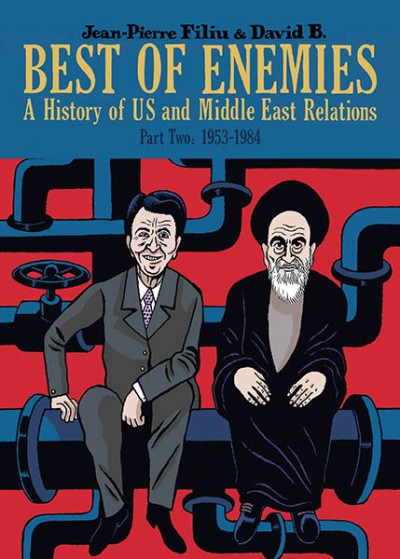 Buy
Best of Enemies
A History of US and Middle East Relations, Part Two: 1954-1984
By Jean-Pierre Filiu, and Edward Gauvin
Illustrator David B.

TThe second volume of Jean-Pierre Filiu and David B.’s graphic novel history of US–Middle East relations begins in the 1950s with the Eisenhower Doctrine and ends with the Lebanese War of 1982. A perceptive and authoritative account of this turbulent historical period, Best of Enemies provides an overview of the Six-Day War between Israel and the neighboring states of Egypt, Jordan, and Syria; the Iranian Revolution of 1979; the Soviet invasion of Afghanistan; and other Middle Eastern conflicts involving the United States. A beautifully drawn account of the time period, Best of Enemies is a milestone of graphic novel reportage and of great relevance to the current political situation in the Middle East.

Jean-Pierre Filiu, a world-renowned expert on the Middle East, is a professor at the Paris School of International Affairs. A regular guest lecturer at Harvard and MIT, he has advised the French Minister for the Interior on Middle East relations. He lives in Paris. David B. is an Eisner Award–nominated artist and a founding member of the independent French publisher L’Association. He lives in Paris.