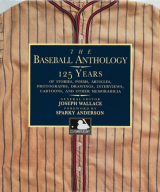 “A treat for the baseball aficionado.” —Publisher's Weekly From Babe Ruth to Reggie Jackson, Ted Williams to Barry Bonds, the 1869 Red Stockings to the 1993 Blue Jays, The Baseball Anthology gives fans a candid look at the colorful stars and the most thrilling and controversial moments in the history of our national pastime. Read autobiographical profiles of stars from Christy Mathewson to Nolan Ryan, reports of great battles like the World Series of 1912, analyses of significant moments like the Black Sox scandal, and fascinating asides such as a discussion of baseball players' bizarre nicknames. This volume is packed with the words of people who have played, watched, and lived baseball, accompanied by some 200 photographs, cartoons, drawings, and objects of memorabilia.

Joseph Wallace is a longtime baseball fan and student of baseball history. He recently published Abrams' World Series: An Opinionated Chronicle. Sparky Anderson, former manager of the Detroit Tigers, was elected into the National Baseball Hall of Fame in 2000.