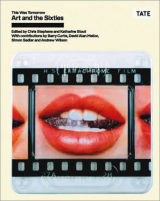 Buy
Art & the 60's
This Was Tomorrow
By Chris Stephens, and Katharine Stout

The myths and realities of the “swinging sixties” provide the backdrop to this unique and beautifully illustrated book, which accompanies an exhibition at Tate Britain. In an age when Britain was undergoing rapid social and cultural change, aesthetics were also being transformed, resulting in new departures in the form and content of British art. Unlike previous books on the subject, Art and the 60's: This Was Tomorrow explores the blurring boundaries within art of the time and its evolving relationships with other cultural forms. The work of artists David Hockney, Bridget Riley, Richard Hamilton, Peter Blake, David Bailey, Colin Self, Eduardo Paolozzi, and Allan Jones, among others, is examined alongside developments in the media, photography, popular culture, architecture, and advertising. Art and the 60's is both a history of British art in the 1960s and a portrait of an era.