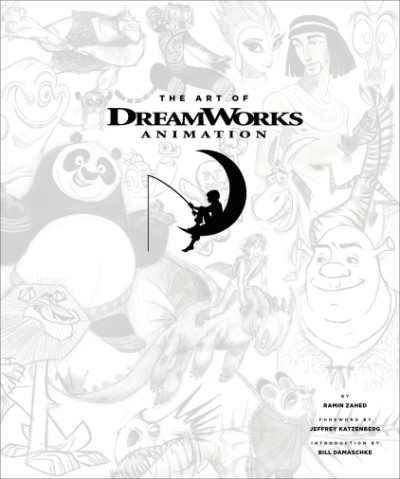 Buy
The Art of DreamWorks Animation
By Ramin Zahed, and DreamWorks
Foreword by Jeffrey Katzenberg
Introduction by Bill Damaschke

Founded in 1994 by Steven Spielberg, Jeffrey Katzenberg, and David Geffen, DreamWorks Animation instantly became a world-renowned animation studio with blockbuster franchises including Shrek, Madagascar, and Kung Fu Panda. Though its earliest films, such as The Prince of Egypt, feature traditional hand-drawn cel animation, DreamWorks soon forayed into claymation with Chicken Run and Wallace & Gromit, and pioneered advanced computer animation with films such as Antz, Shark Tale, and How to Train Your Dragon.
Brimming with concept art, preproduction designs, and char­acter sketches, DreamWorks Animation marks the studio's 20th anniversary and offers unprecedented behind-the-scenes access into its archives. An introduction by DreamWorks cofounder Katzenberg provides insider perspective on the studio's most popular films, as does running commentary from artists and direc­tors on all of DreamWorks' 30 films to date.

“A visually extravagant tour of 16 years of features.”
— Variety

“I recommend this book for anyone who has a love for DreamWorks movies or animation in general.”
— The Florida Times-Union

Ramin Zahed is the editor-in-chief of Animation Magazine and has been covering the animation and visual-effects world for more than 20 years. Previously he was a senior editor at Variety. He is also the author of The Art of Rise of the Guardians and The Art of Puss In Boots. He lives in Los Angeles.