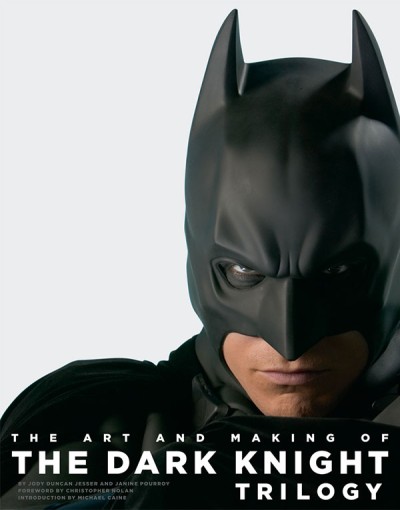 Buy
The Art and Making of The Dark Knight Trilogy
By Jody Duncan Jesser, and Janine Pourroy
Foreword by Christopher Nolan
Introduction by Michael Caine
Designed by Chip Kidd

In 2005, director Christopher Nolan redefined the Batman legend with Batman Begins, starring Christian Bale as the Caped Crusader. A fresh, dynamic reboot of the franchise, Batman Begins explored the comic book hero’s origins and his evolution from billionaire Bruce Wayne to dark avenger who fights crime and corruption in Gotham City. A 2008 sequel, The Dark Knight, took those compelling, character-driven foundations and raised the stakes, pitting Batman against a deranged master criminal, the Joker, in an all-out war for Gotham’s soul. Now, the final film of Nolan’s trilogy, The Dark Knight Rises, is 2012’s most anticipated film release.
The Art and Making of The Dark Knight Trilogy tells the complete behind-the-scenes story of these three monumental films. Based on in-depth interviews with Nolan and all of the films’ key cast and crew—including cowriters David S. Goyer and Jonathan Nolan, cinematographer Wally Pfister, and more—the book reveals the creative process behind the epic Dark Knight Trilogy, supported by lavish art and never-before-seen photography.

BATMAN and all related characters and elements are trademarks of and © DC Comics.
(s12)

Praise for The Art and Making of the Dark Knight Trilogy:

“A beautifully artistic photo book . . . For anyone who ever wanted to make a movie, The Art and Making of The Dark Knight Trilogy is as good a blueprint, as well as being an engrossing tale, of the making of a mega-hit film series.” —McClatchy Newspapers

“This chance to revisit Batman Begins and The Dark Knight in ways both smart and definitive has revived my faith and enthusiasm on numerous levels. Kudos to authors Jody Duncan Jesser and Janine Pourroy for pulling off what seems like a daunting task, and doing so with style to spare.” —School Library Journal

“Every aspect of Nolan’s filmmaking process is detailed in Jesser and Pourroy’s fantastic, gorgeous book, accompanied by hundreds of high-quality photographs and illustrations. I could easily see it selling for $60–$75 because of the crazy amount of Bat-tastic geeky goodness within. BUY. THIS. BOOK.” —Geeks of Doom

“This sumptuous coffee table book is pretty much the perfect studio-sanctioned guidebook through Nolan's films . . . No stone is unturned, and no interesting production still or story is neglected . . . No need to say more here, I think: if you love these movies . . . you’ll find this book to be an absolute treasure.” —Comics Bulletin

Jody Duncan Jesser has served as editor of Cinefex magazine since 1992. She is the author of 10 books covering the making of blockbuster films, including Terminator 2, Jurassic Park, and Avatar. She lives in Los Angeles. Janine Pourroy has written extensively for Cinefex magazine, covering special and visual effects in film since 1985. Pourroy lives in Southern California.