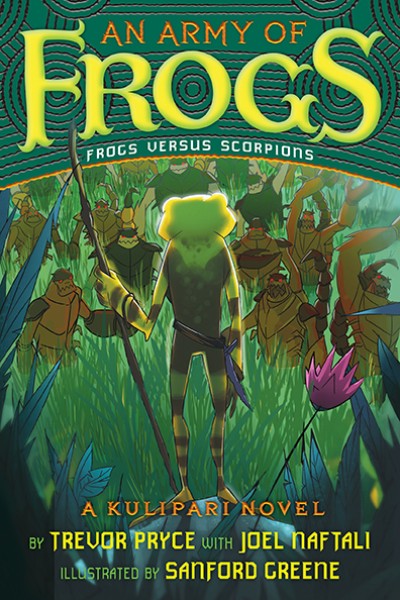 For years, the frogs of the Amphibilands have lived in safety—protected by an elite group of poisonous frogs named the Kulipari and by the dreamcasting spell of the turtle king that cloaks their lands in mystery. Now the spell is threatened by the Spider Queen, a talented spellcaster, and Lord Marmoo, leader of the scorpions. With the Kulipari off training in secret, the Amphibilands have never been so vulnerable. Enter Darel, a young frog who dreams of joining the Kulipari, despite his utter lack of poison and limited fighting skills. With the help of a motley crew of friends, Darel has the chance to become the warrior of his dreams.

Trevor Pryce is a 14-year veteran of the NFL who played defensive end for the Denver Broncos, the Baltimore Ravens, and the New York Jets. He is also a commentator for Fox Sports. He lives in Maryland.

Joel Naftali is the author of many books, several written with his wife, Lee. He lives in California.

Sanford Greene is an accomplished comics illustrator whose work has been published by DC Comics, Dark Horse, and more. He lives in South Carolina.