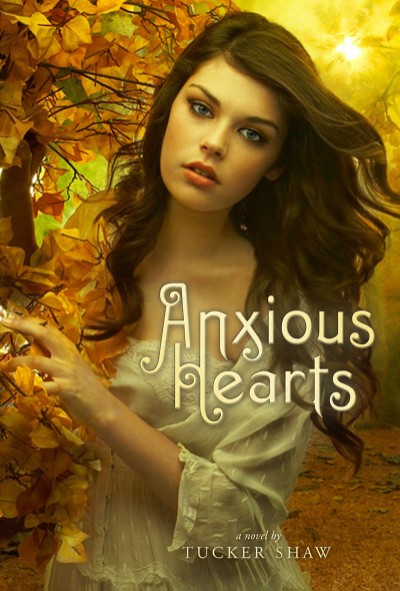 Eva and Gabe explore the golden forest of their seaside Maine town, unknowingly tracing the footsteps of two teens, Evangeline and Gabriel, who once lived in the idyllic wooded village of Acadia more than one hundred years ago. On the day that Evangeline and Gabriel were be wed, their village was attacked and the two were separated. And now in the present, Gabe has mysteriously disappeared from Eva.

A dreamlike, loose retelling of Henry Wadsworth Longfellow’s famous love poem “Evangeline,” Anxious Hearts tells an epic tale of unrequited love and the hope that true love can be reunited.

From School Library Journal:
“Evangeline,” Longfellow’s tale of Acadian lovers separated on the eve of their wedding day only to reunite tragically after years of longing, provides the springboard for Shaw’s modern retelling. Chapters narrated by Eva alternate with those told by Gabriel. She tells the contemporary story of her growing awareness of and ensuing impassioned bond with an old childhood friend. Her love, Gabe, who is grappling with a family tragedy, scribbles in a notebook incessantly. It is not until they are separated that Eva reads the notebook, which turns out to be a close retelling of the original tale (Gabriel’s words that comprise the alternate chapters). This plot structure is quite seamless in execution. Eva’s voice keeps the book grounded in modern sensitivities. Like Longfellow, Shaw gives nature high importance through descriptive passages of his chosen Maine setting and pays homage in many other small ways from incorporating original lines into dialogue and transplanting subtleties of characters’ personalities. He is in no way, however, a slave to Longfellow, delivering both a couple of steamier scenes and potential for happiness in the end. The blustery landscapes and their intimate connection to the characters’ plight are reminiscent of Helen Frost’s The Braid (Farrar, 2006) and even, at times, of certain scenes spent in seaside forests by a similarly thwarted vampire/human teen couple. It is this very power to evoke both admired historical fiction and hot teen literature that will prove this novel’s success.–Jill Heritage Maza

Tucker Shaw, who has been featured on The Today Show, is the author Everything I Ate and many popular books for teens, including Confessions of a Backup Dancer. He lives in Denver, where he is a food editor for the Denver Post.