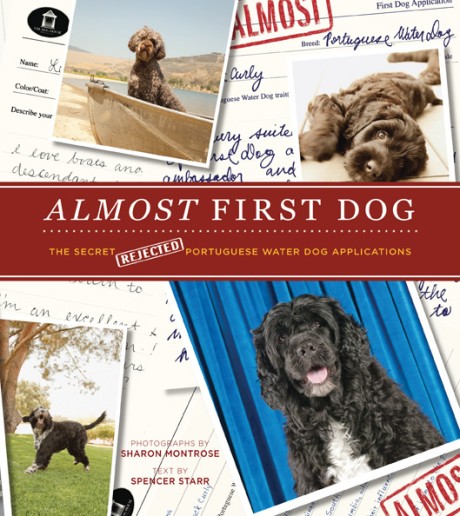 One of the most closely watched developments of Obama's first 100 days has been the arrival of the first dog. Before Portuguese Water Dog Bo was chosen, there were months of speculation over what privileged pooch would be The One. Now that we know, the popularity of "Porties" is expected to surge and the country—desperate for some lighthearted news—is enthralled.

In Sharon Montrose's Almost First Dog, Portuguese Water Dogs of all shapes, ages, and colors submit their "headshots" and "resumes" for the first family's consideration. Along with each photo—some studio shots, some outdoor shots, some action shots in the water—is a form the dogs fill out about their qualifications and special skills. Who knows—a Jack Russell in a PWD wig might even slip through. The combination of Montrose's irresistible photography, hilarious text, and the national interest in the Obamas' chosen breed should make for the perfect package and 2009's must-have pet book.